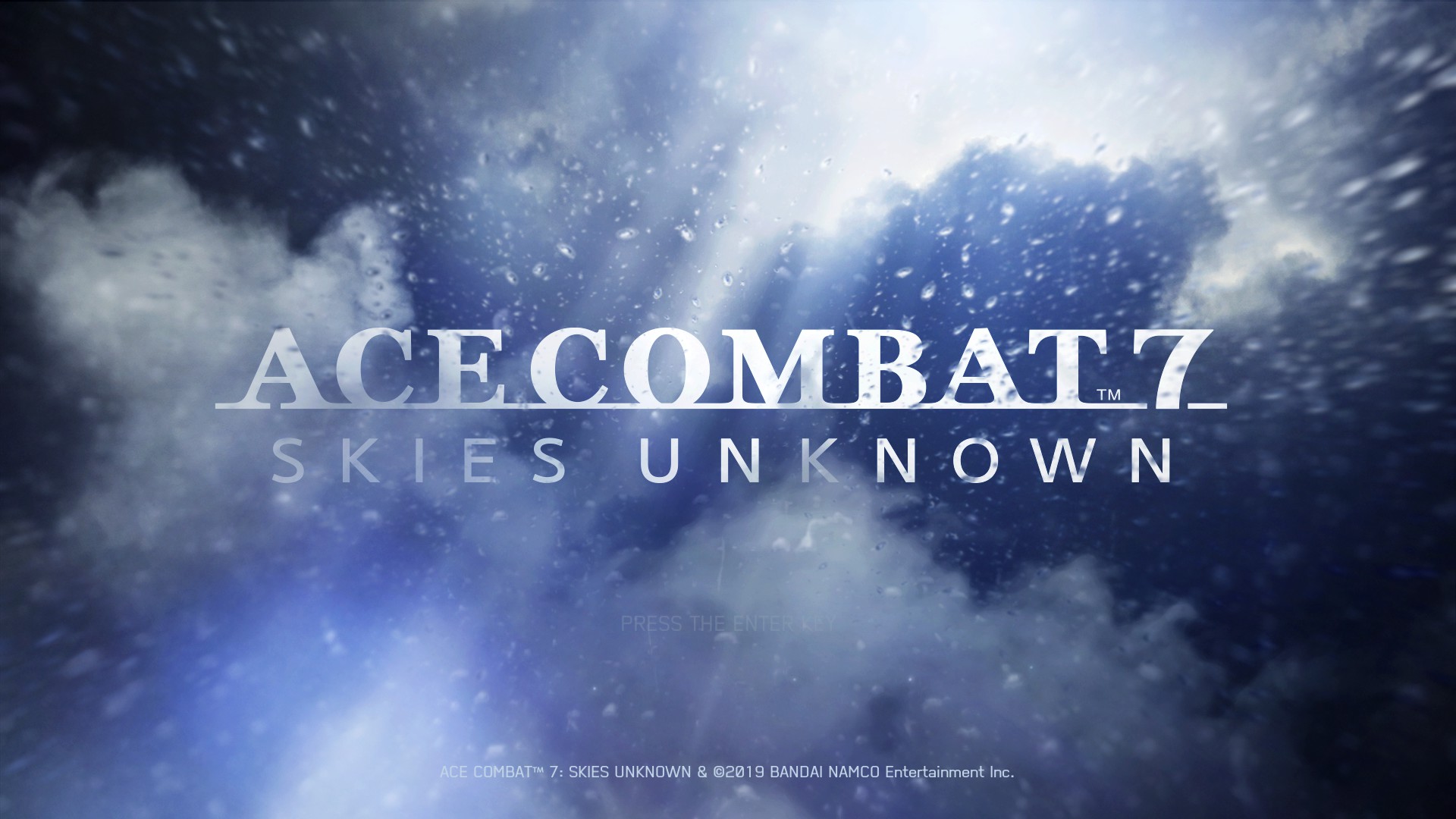 Ever since I played Thunderhawk and Ace Combat: Distant Thunder on my PlayStation 2, I was hooked on arcade flying games, even some simulators as well. And after multiple first impressions of the latest Ace Combat on Gamescom over the last two years, it’s finally here!

The story hasn’t always been the strongest element in the Ace Combat series, when it comes to writing and how to execute it. There are some similarities in Ace Combat 7. It has all of the base elements to create a decent story, however, what really impressed me is the use of other elements that we’re used to when it comes to the “performance” of the story. If you’re a fan of this series you would know that they usually execute the story with short cinematics, and mainly throughout conversations on the radio during missions and briefing before missions.

Ace Combat 7 hasn’t changed from the previous titles, but the performances of the voice actors are much better than before (English version), and oh boy, the score/soundtrack. Yes I know, we don’t usually talk about the music and sound design in this section, we usually cover this within the ‘Graphics’ section. But I absolutely have to mention this here as well, because, the music is incredible and really sets the mood and injects tons of adrenaline while playing and experiencing the story.

Without spoiling too much of the story, Ace Combat 7 stays true to the Ace Combat lore. It takes place in Strangereal in 2019, and we play as the pilot ‘Trigger’ an ‘Osean Air Defense Force’ pilot in the Lighthouse War. After a heinous crime, Trigger is sent to the Spare Squadron penal unit, and have to, from there on out, comply to do really dangerous missions. As well as Trigger, we also follow Dr. Schroeder, Avril Mead, and other minor characters in the war.

Even though I didn’t have tons of different emotions throughout the story, I did find it intriguing, interesting and sometimes really exciting. I would easily say that the “power of the music” has a huge impact on this experience.
9/10

Let’s start off with the things that didn’t really impress me, it isn’t much, but it lowers the experience a bit. The overall look in Ace Combat 7 is astonishing, the minor detail on the planes, skies, clouds, environmental graphics, sound design and even more. But on certain maps, the texture details of the ground and objects on the ground differ from other maps. (Especially on desert maps) It’s not a big deal, as the big event is in the skies. The second thing I want to complain about, and it might just be me personally who doesn’t like this, but in cutscenes, there are objects that are just “copy pasted” pictures. One example is a still image of a Golden Retriever beside one of the characters, it’s easy to spot.

But again, the real fun is in the skies. There’s no surprise that the development team behind Ace Combat 7 know how to create beautiful and photo-realistic 3D models of the planes. What really impressed me was the all-new ‘trueSKY’ engine that impacts the dynamic weather and clouds in the game. To go into more detail on what this engine does, it conducts volume rendering right in front of you by drawing the clouds. Small details such as water drops and the icing on your windows are well detailed and still amaze me after 20+ hours of Singleplayer gameplay. This new cloud engine provides a fresh look into the series and brings more strategic elements to the gameplay. I just have to mention the music/score again, because it’s amazing! Other sound design details are great as well, such as firing missiles, taking off, throttling, braking etc, but nothing in this game can top the quality of the score.
9.5/10

Campaign
Besides the great story, the gameplay element also impacts the whole experience. It’s really satisfying destroying multiple enemies at once by blasting out six missiles, using the “Top Gun” maneuver (brake and glide over the enemy behind you), flying dangerously close to the ground, flying through thunderstorms and so much more. Each mission in the campaign provides a different type of challenge as well as weather condition challenge. You can get missions where you have to stay below a certain altitude, stay out of spotlights sights (almost a stealth-like mission), and of course, facing the Arsenal Bird who carries around 50-60 UAV drones!.

I was really afraid that the campaign in Ace Combat 7 would be a linear and repetitive experience, my fear didn’t come true at all. Even after this review, I’m still replaying the story mission on different difficulties and planes. Combined with the multiplayer mode, you can purchase planes, mods, and weapons in the games ‘Aircraft Tree’. You can look at it like an RPG skill tree, you gain in-game currency on each mission and online matches, (Be aware!, the Aircraft Tree is huge!) some modes and planes can only be used in Singleplayer mode.

Besides the campaign, you can also view your campaign and multiplayer data/statistics, replay cutscenes, listen to the in-game music, view planes with tons of details and more within the “Viewer & Player” section.

Virtual Reality
Okay, let’s talk about the VR Mode. No, you can’t play the entire game in VR, instead, there are three VR exclusive missions. You can spectate an air show and you can go on a trip with free flight, and yes, for now, this is only available for the PlayStation VR. Playing Ace Combat in VR sounds awesome, looks awesome and it feels awesome! The only issue, however, is the motion sickness. This will, of course, affect people differently, but I personally couldn’t play more than one mission each day to avoid puking. And that’s really sad because I love the VR experience, connecting my joystick to the PlayStation, putting my VR headset and headset on and I’m the greatest ‘Ace’ pilot there is! I hope in the near future that a fix for motion sickness will occur, but for now, I just have to bring a bucket to the party.

Multiplayer
There are two different modes you can play online, ‘Team Deathmatch’ and ‘Battle Royale’.
And no, not the battle royale you might think. ‘Battle Royale’ mode is a free for all match where the first player who gets to 100.000 points, or when the time is up, wins the game. You gain points by hitting and destroying other players. ‘Team Deathmatch’ is similar, but you play as one of two teams of four players, and the first team to gain 250.000 points or has the most points when the time is up, wins the match. Even though there isn’t much variation to the multiplayer there are some minor details that keep things interesting, such as “Bounty on your head” mechanic, if you do well in a match you will get a bounty on you that is visible to everyone.
9/10

So the replay value isn’t that high, and I was prepared for that. The only replay value I can find in this title is the challenge of playing the campaign on a higher difficulty, gaining more ranks in the multiplayer progression and of course unlocking planes and more in the ‘Aircraft Tree’. You will also unlock new nicknames and more as well, playing in either Singleplayer mode or Multiplayer. Or if you are like me, just flying around and listening to the incredible soundtrack of Ace Combat 7: Skies Unknown.
7/10

I believe that Ace Combat 7: Skies Unknown will be well received by the fans of the series and genre. The graphics are incredible, especially with the aid of the new ‘trueSKY’ engine providing a great strategic element by flying through clouds. The dynamic weather is astonishing and one thing that the Ace Combat series never disappoints on, is the soundtrack, the score is a true masterpiece. If you’ve never played an Ace Combat game before, this is a great introduction title. The VR experience is awesome, too bad my stomach says otherwise.