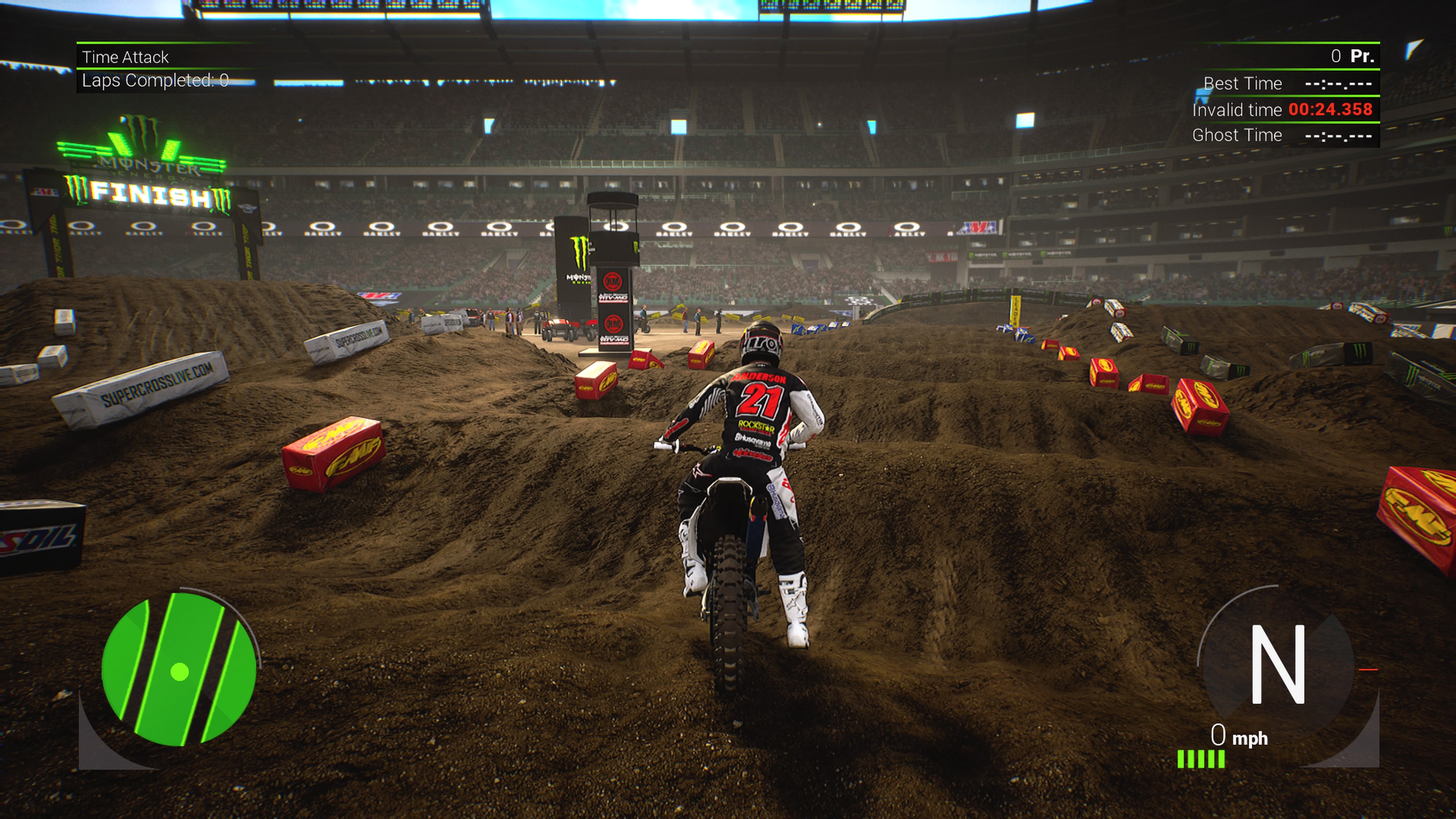 Okay, so I’ve never been into motorbikes – neither on- nor offroad ones. However, I am really into drinking Monster Energy. So half of the title really spoke to me! Obviously, I also like games, regardless of their genre. And I do try to keep an open mind, so I revved up my engine (with half a liter of Monster) and got going!

Although very basic, the story is one of the best parts of Monster Energy Supercross 2. You start out as a rookie with few followers and little money. And then you work your way from there. Agree to sponsorships and fulfill their objectives to earn money and fame. Doing so unlocks more sponsors. I think you get the deal by now.

Otherwise, the career mode is made up of weekly management, when to train, when to meet fans and so forth. All with their pros and cons. By the end of the week, it’s time to get going to the tracks and drive a race. All in all the career mode feels a bit shallow, and I have played this story so many times before. It’s not a bad addition to the game, it’s just very “nothing”.
6/10

Probably Monster Energy Supercross 2’s strongest point is its looks. In other words; it looks good. And it runs rather smooth. Apart from the loading screens, that is. I do not understand why, but every single loading screen screwed up the music (think old LP record player being stuck). Not a big deal, but an annoyance for sure.

The tracks look awesome, and to my pleasant surprise – the muddy ground makes your bike leave tracks (!!!). The riders are not the best looking, but it’s not too important, after all, this is a racing game, not a “Be a model”-game. The UI looks good as well, with being quite simple and easy to grasp. I do love the fact that all is “Monster-green” as well. A small, but important detail when making a game which focuses so much on the energy drink with the same name.
7/10

The gameplay in Monster Energy Supercross 2 is pretty much mediocre. It’s not necessarily anything wrong with it, but it feels a bit like a copy-paste work from Milestone. I have played games with exactly the same kind of gameplay before, although not set in Supercross, I’ve been playing the same scenarios with cars, on tarmac-tracks and even my one-time try with an SBK game (which was also made by Milestone).

The game offers lots of different game modes, such as career, race, time trials and so forth. Unfortunately, they all feel pretty much the same. Yes, the career offers some management of sponsors etc, but overall I get the same experience with just racing regular races. I also wonder why I have to play as a male rider. I thought girls did supercross too? Definitely not the biggest of deals, but that would have been a nice addition, maybe for Monster Energy Supercross 3, Milestone?

Then there’s the whole thing with microtransactions. Far from the worst game when it comes to these extra fees (I’m looking at you FIFA), but Monster Energy Supercross 2 does have some “just buy this pack for 20NOK and get some new helmets (etc)” moments – automatically a minus in my mind.
6/10

Oof, the controls are really bad. I’m sorry, but they are. Time and time again I wanted to throw the game, controller and console out of my fourth story window and never play this game again. The controls take way to long to register input, I’m talking easily half a second or more. Yet, the analog sticks are way too responsive, once they respond(…)

The one positive thing I can say about the controls is this: the layout makes sense. Like, you use triggers for accelerating/braking and so on. Otherwise, there’s not much to cheer for, unfortunately.
4/10

I’m not sure what to write here, the game technically has lots of replay value with trying to set better times in time trials and such. And it does have different modes, such as career, race, etc. However, all of them feel very much the same. For example, I don’t really need the career mode, as the races give me basically the same features, at least when it comes to the riding section. Regrettably, quantity has trumped quality here, and the replay value does take a blow for that.
5/10

I’m still not hooked on this thing with dirtbikes, Monster Energy Supercross 2 simply isn’t the game to change my mind on that. Although it is a good looking game, with pretty good gameplay, Monster Energy Supercross 2 falls short on other places. Most importantly the controls. With some patching though, the controls can be salvaged. Oh, and don’t forget the microtransactions, a destroyer of any game. If you did play the first game and liked it, I assume you’ll want to give this a go too. But don’t think this is a GOTY contender.