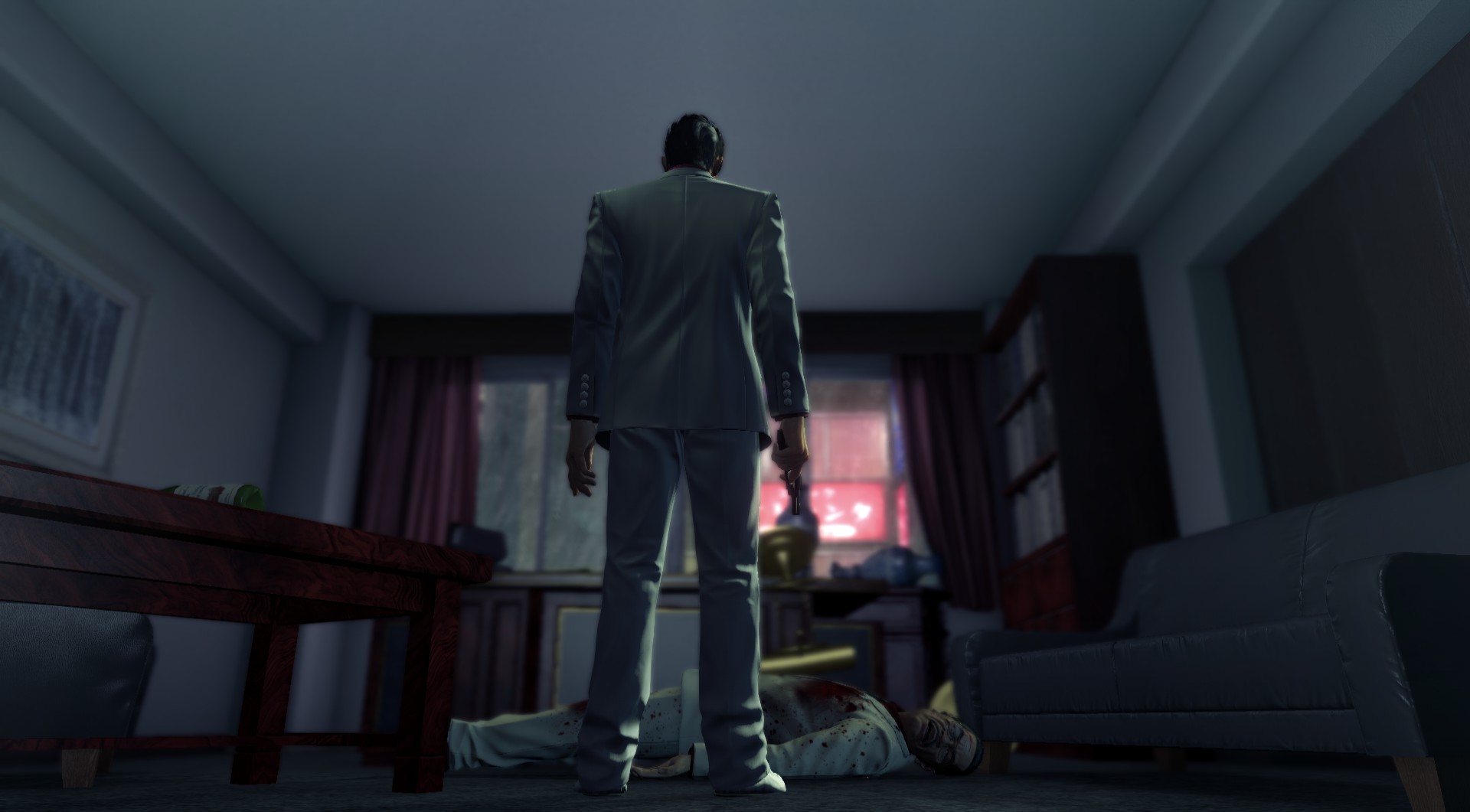 I never had the chance to play this game when it first released on PS2 in 2005 as Yakuza or when it got a remake for PS4 in 2017, but now as the game is being released on PC, my kind of platform, I finally had the opportunity.

Story
The story is pretty solid. You play as Kazuma Kiryu, a Yakuza in the Tojo clan, who’s got the nickname “The Dragon of Dojima”. Early on Kiryu wants to make his own subsidiary family, but after his friend Akira Nishikiyama murders their boss, Sohei Dojima”, Kiryu takes the blame and ends up going to prison for 10 years. Needless to say, you’re not getting a good welcome back after those 10 years are done. At this point, you learn that a lot has changed over the years, and someone stole 10 billion yen from the Tojo clan bank vault. Without spoiling too much of the story going further here, up to this point you’ve had it easy in the prologue. This is where the game starts properly as you fight your way through the streets of Kamurocho, and through the endless amount of Yakuza out to end you. The story going through the game got plenty of details as you go through chapter after chapter. My personal opinion is that the story makes the game somewhat slow paced as there’s a lot of dialogue and cutscenes, plus some missions where you feel like you’re just repeating yourself step by step along the way. But with that being said, The frustration from a civilian giving you a hard time just because he doesn’t like the Yakuza and you look like one is a fun addition. Likewise, the dialogues and cutscenes as tedious as they might be, dig you deep into the story almost like a good book will take away your hours.
8/10

Graphics
This is a remake of a remake in a way, as the PS4 version was a remake of the original game in the series, and this PC version is being boosted once again. That being said, they’ve made it pretty well. The characters and surroundings are detailed and the movements of the characters are flawless. The fighting scenes, which is most of the gameplay to be fair, have different movements for every attack and the ultimates just look outright brutal. The only thing in the fight scenes is that in the boss fights, there may be a crowd of people watching. These are not that well detailed, but then again, they are only there to make an outer wall of the fighting ring. It’s not the realistic graphics many games go for today, but as a remake, it’s still pretty good. The soundtracks of the game fit in as well, with speedy fight music whenever there’s trouble, and as the game changes between happy and sad memories in cutscenes, a good time with friends early on, to being marked for death by the Yakuza, the music changes to fit the current mood. While walking the streets of Kamurocho, you can hear how busy the streets are (or how quiet the back alleys can be), and while fighting the soundtrack is there to give a feel of how hard you just hit that poor enemy as he flails to the ground. Almost all dialogue, except the standard “what do you want today?” from shopkeepers, are made by voice actors in Japanese, which I don’t mind, but thankfully there’s also English subtexts. There’s not that much more to say about the graphics, in summary, the game looks beautiful and the soundtracks are a delight.
8/10

Gameplay
As mentioned above, you play as Kazuma Kiryu, a Yakuza in the Tojo clan. After the somewhat long prologue leading up to you taking the blame for the murder of your boss, you are released from prison after 10 years. There’s been a lot of changes during that time, easily noticeable by the way Kiryu is confused just getting handed a cellphone. His childhood friend Akira lost his sister to an illness not long after Kiryu went to prison (You hear about her illness in the prologue, and is one of the reasons Kiryu takes the blame for the murder) and as a result, he devoted his life fully to the Yakuza and went up the ranks until he was able to start his own family. Another childhood friend, Yumi, who was there when the boss got murdered, have also gone missing.

As Kiryu, you start looking for Yumi and the 10 billion yen stolen from the Yakuza. All while fighting your way through endless mobsters from the Yakuza, as the streets of Kamurocho turn into a war-zone between the different factions (as well as government agents and even the triad).

You find a girl named Haruka whom the Yakuza believe to have the money stolen from them, and you take it upon yourself to keep her safe as well.

Kiryu believes in the old fashioned way of the Yakuza where you don’t need to fight anyone unless there’s a reason, but once you have that reason, you beat the living hell out of them. Before prison, you meet your rival, Majima, who wants to fight you. You tell him off while getting some beatings as he gets more and more angry, but he tells you that one day, he will give you a reason to fight. As you get out of prison, he finally gives you a reason and a fight starts. That’s when I noticed Kiryu was way weaker than in the prologue. Majima tells you you’re rusty and he devotes his time to make you strong again by constantly showing up and fighting you, sometimes even in disguise. All of this because he wanted to fight the unbeatable Dragon of Dojima, not the weak man you find yourself as after prison. All your skills are reset and you start building these up again by defeating Majima and by getting experience from fighting all the thugs in the city, and by doing missions.

The normal fights are easy enough, with one or more low-rank Yakuza members coming at you with fists and/or basic melee weapons, but the boss fights, like the fights against Majima, or the first fight against Futoshi Shimano, the first clan leader you fight, can take quite a while. As you regain your skills these fights will get easier, but at least when I got to Futoshi, I didn’t have that many skills yet, and the fight cost me almost all my food (healing) and took me 15-20 minutes to beat with a lot of running away from his attacks. As well as having an enormous amount of health, he also heals a couple times throughout the fight. In the end, it wasn’t as challenging as it was time consuming and boring to do these boss fights. As you progress tho, it gets a bit more fun, which is good, as the game basically built around the fights.

The gameplay switches between slow-paced dialogues and cutscenes, to fighting scenes where some are fast paced, when you get a bunch of fighters at once, to slower paced fight scenes where there’s only a boss to beat.
8/10

Controls
Well, they say it themselves when you start the game. “Real Yakuza use a gamepad”. The keyboard and mouse controllers are not the best, as I had to up my DPI a lot just to be able to look around while fighting or just running through the streets. The keybindings can be changed, and I think you should, as the standard ones are clunky and not optimized. There isn’t much delay tho, so once you’ve managed to find the button you are to press, you’re good to go. I would recommend using a controller if you do want to play this game on PC tho. Personally, I feel that a console game coming out on PC should be built with a better setup for keyboard and mouse, as otherwise, you could’ve just played it on your console (if you do have one of course).
4/10

Replay Value
There’s not that much of replay value to this game unless you want to go through the exact same story yet again, just on a higher difficulty. Once you’ve completed a chapter, it unlocks in the main menu, so you can go back and replay that chapter if you want. Maybe you want to unlock all the achievements, so there’s that. But just basic gameplay replay value, there’s none. Although the story is good, there’s nothing new on a second playthrough, unless maybe if you rushed through the first time. That being said, even though the replay value isn’t there, the game was worth the time based on the story alone, and as such, the story continues with the next game in the series.
8/10

The game is fun and the story is good. The boss fights could’ve been better, but if you manage them, the rest is a joy. The slow pace of the story gives you a broader specter of details into the lives of the characters so it’s easier to get into the role of an exiled Yakuza. If you do have a gamepad you won’t have problems with the controls, making the game so much better, as is with many games ported from console to PC. All in all, even while playing on a keyboard myself, the game was worth the time based on the story alone. The graphics make for a nice experience while walking around town, and apart from the first boss fights taking ages with no proper skills yet, even the fighting scenes were good enough for a good experience.