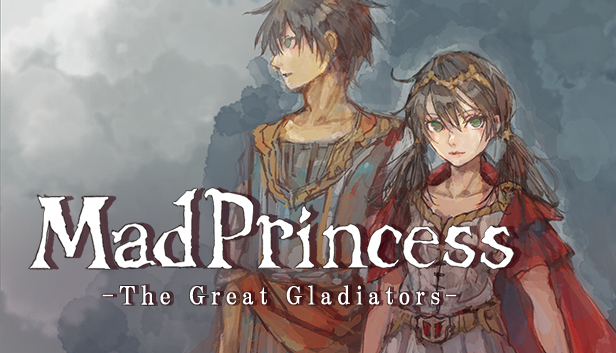 Reading about this game, I figured it could be a fun one, so when we got the opportunity to review it, I quickly proclaimed my interest. Whether or not this was a smart decision will be revealed further down in this review.

First off, let’s talk about the story. The story, when you actually find points of it, is good. But it’s laid out in a messy layout. You start your game being captured and put in a cell, being told you have to start fighting in the gladiator ring. You get a short tutorial to your surroundings and what the different rooms are as you walk into them. You go to bed for the day, and when you wake up, it’s time for day one of fighting. There are daily conversations at the pre-coliseum room, and you get some background story for the other prisoners/gladiators. After fighting your way through easy and hard battles in the Coliseum, you end up tag teaming with another prisoner, fighting for her freedom. After you’ve won this, you’re both free. This is basically where the game truly starts. You are led to a town, figure out you’re one million gold coins in debt because someone actually paid for your freedom. From now on, you have a big map you can walk around on, exploring areas and fighting monsters along the way. This is also where the game turns messy. There’s no proper way to get notifications about any of the areas. Every side quest you get, you need to remember, because the game sure as hell doesn’t write it down for you. The hours I’ve put into this game though, have yet to produce enough gold coins for me to pay down my debt, so i can’t say how the game is after that. All I know is that there are large portions of the map that isn’t “safe” for me yet, so I’m not allowed in there.
3/10

The visuals. Every area got some nice background art. Every town has some nice artistic background picture, unique for every town and city. Keep in mind, you don’t walk around in this game, but rather use a menu on the left side of the screen to determine what to do at every point, so the game is built upon these artistic background pictures. That being said though, the other characters in this game, whenever they want to talk, or you want to talk to them, pop out in front of the picture, destroying it with their pixelated bodies. Almost every enemy you fight will be a black figure in a familiar or unfamiliar shape (Horses, rats, some tiny tentacle monster and so on). When fighting other characters though, It will be their badly pixelated bodies out there on the fighting screen.

One thing about all the dialogue in the game, there’s no voice acting, so there’s some nice reading to be done. Although some of the conversations can be enlightening and humoristic, it’s a big deal breaker when some of the text actually goes off out of the screen. This happened even after double checking that I saw the whole game screen having the right resolution, which, you can’t really change if it isn’t.

Next up, soundtracks. The musical soundtracks of the game, although not the best, they’re not bad either. They’re just there, trying their best to set the mood of the scenery. All other soundtracks though, mostly fighting, as there are not many soundtracks depicting the nature around you, aren’t something to be proud of. It sounds like some bad 8-bit sounds from the mid ’90s.
3/10

First off, It’s a simple game with simple mechanics, you fight your way through the gladiator ring until free, and then you fight your way through areas trying to get as good and rich as you can. It’s not an easy life. Every town has an Inn where you can pick up requests, that actually gets saved on a list for you while traveling. It’s mostly about finding 100 rocks or other things, in a set amount of in-game days. They also have a place to sleep, where you can choose between a stable (free, but replenishes your health and energy slowly), A cheap room, middle room or expensive room (the more expensive, the faster you recover). These beds are also the only way to save the game. The fights quickly become tedious, as the fight itself is all about just clicking a button above your character, and then hitting the enemy targeted that way. Using your abilities, given to you from your gear, correctly, keeping a hard enemy stunned or otherwise incapacitated may be the difference between a win, and a loss returning you to town, ready for bed.

Talking to the citizens of different towns improve your relationship with them. You can also accomplish this faster by giving gifts as well. When you start becoming friends with some of them, you can ask them to become your companion, joining you in your travels, helping out in fights. You can also give them some gear, but only the same types they’re already using, as you can’t change their “class”.

Basically, the gameplay is straightforward to explore and fight. The only, and big problem, is the fact that after doing this for a certain amount of time, it quickly becomes tedious. There’s close to no differences between the different areas, other than the actual loot you can get (not much gear wise, more about where you can gather rocks, mud, plants and so on).

Opening chests, digging up plants, chopping rocks for minerals and more, require you to buy equipment needed for each ability, and a shovel for digging for instance, only have one use, leaving you to buy a bunch of everything just to be able to get a couple plants/ores/gear. Some items and plants may be eaten to increase your hp and energy, but unless you’re really lucky, or perhaps way later into the game, you’ll only get small amounts back from doing this.
3/10

The controls couldn’t be simpler for this game, as everything is about clicking on different menus you could literally disconnect your keyboard. Everything is done by right- and left clicking with your mouse. The settings menu give you two options; lower sound, and lower music. There’s no save button, as sleeping is the only way to save, which is fair enough. One thing that should be implemented though, is a way to exit the game. As of right now, you need to tab out of the game and close it through left clicking on the game down on the windows bar. Every shortcut on the keyboard I’ve tried does nothing. I can’t even use the button to mute my microphone on Discord while inside this game.
2/10

I am not going to say that there’s absolutely no replay value here, as there are probably some aspects some might want to redo differently, but personally, I’d never go for round two. I’ve got more than enough trying to get through once. In general, though, there’s no real replay value, as there’s only one way out of the Coliseum, and after that, you can basically just fool around as much as you’d like on your way forward.
2/10

Not the best of games, and unless you love open world RPGs with close to no guidance, this probably won’t be a game for you. Personally, I’ll probably continue playing this from time to time, just to try and get forward, and for what it’s worth, it’s a good game to launch up when you’ve got one of those days sitting in front of the computer, no one online, nothing you really want to do, but you still sit there looking at your screen. Launch it up, do some mindless playing and wait for something better to come along.