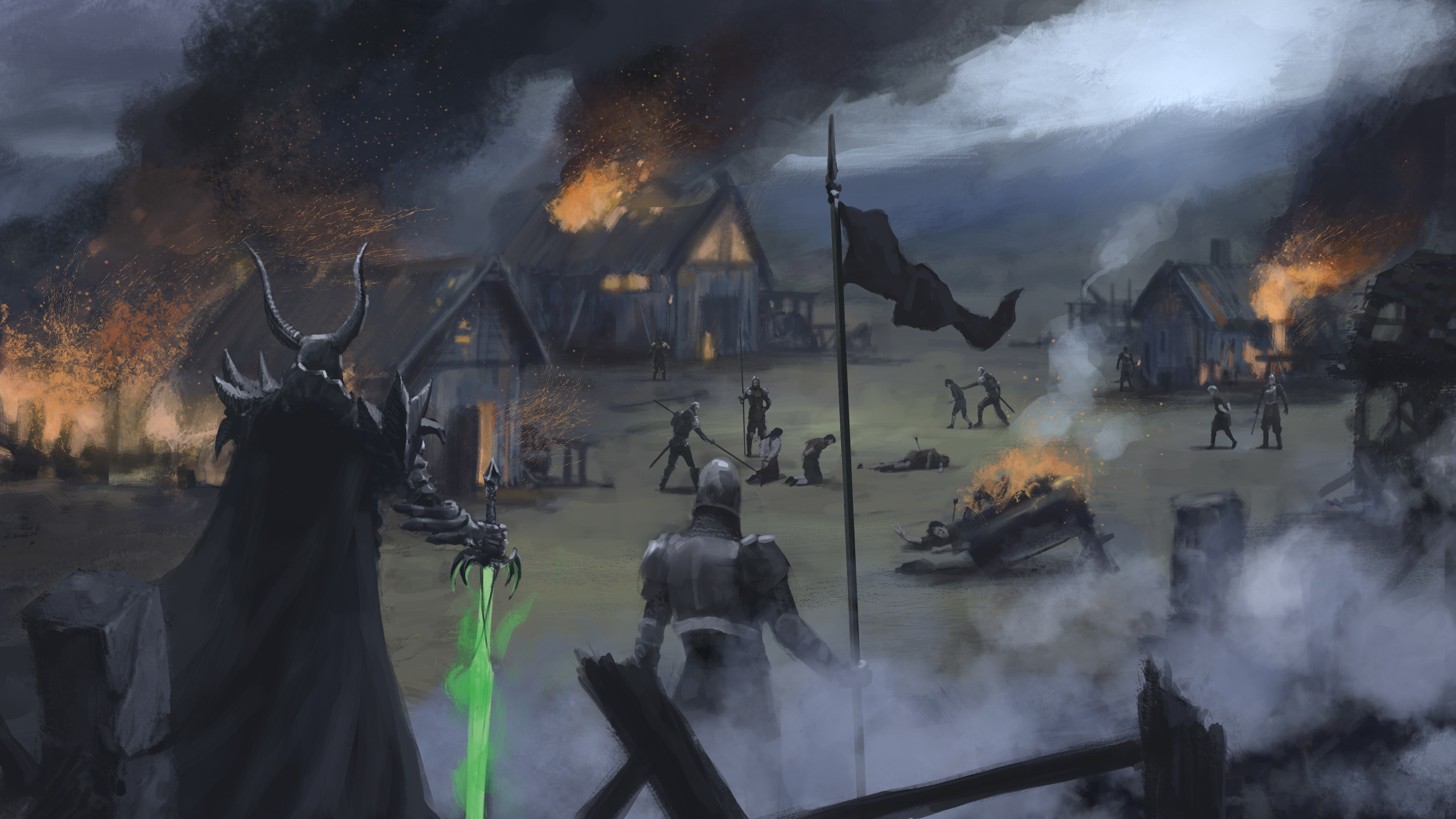 The plot is, you’re a fallen warlord and need to do what warlords do be the mightiest of the realm. You know, the usual medieval slaying and killing all with your banner raised high.
Narrations are done respectfully with illustrations resembling aquarelle paintings.
To be lean the story in this one is nothing special, as far as I have come to know during my couple of hours of gameplay.
4/10

The graphics are only as good as needed. You can distinct between buildings and terrain and after a while, you even distinguish an archer for a swordsman (takes a little practice). As this is a game done with Unreal Engine there are some pretty cool traps and unique mechanics for an RTS. Dynamic traps, terrain and such. Nothing that will blow your mind, screen capture and share with your friends. Little tidbits. Overall it’s not a game about amazing graphics. They just work. The music gets repetitive after a while, so you probably turn that down to 10% after an hour or so. The overall sound design is good, though.

At the time this review where done they had not released a specs sheet, but my laptop (8th gen i5 CPU, 1060GTX graphics card) had a pretty hard job keeping the system cool and the fans were trying to get rid of the wasted energy as fast as they could.
5/10

If you ever tried an RTS game you have nothing to fear. It’s the same stuff right here. There are some small additions to the genre, like the dynamic terrain, but all in all, it’s not something that will astonish you. The single player is split into three parts. Tutorial (do this first), Campaign (play a mediocre story) and Skirmish (quick game vs CPU).

The campaign starts pretty slow as your first task is to limp your way across a map while avoiding bumping into bad guys. Next up is to protect your ground followed by defeating some enemy camps. From there on it escalates in difficulty as expected.

Multiplayer lets you do unranked, ranked and custom games. In each mode, you can choose to go for 1vs1 or 2vs2 games. As there where far too few players online when checking the game out I could not try this for myself, I’m afraid!
It has all the elements wanted in gameplay for an RTS, really.
5/10

This game controls fine. It’s an RTS, so your point and click and later on learn that keyboard shortcuts help out. To move the camera you either move your cursor to the edge of the screen or use the arrow keys (Lift your left hand from your normal WASD position and all the way over to the right hand side of the keyboard *sigh*).
6/10

As a single player game, it’s just fine. I doubt I would ever replay this game, though. There might be some moments worth replaying later on in the game (I did not get to end game), but I doubt it.

As there was never any luck matchmaking in the multiplayer (Steam reports 24 players online as I write this) I can not say anything good or bad about this. We did get two copies of the game to review the multiplayer as well, but life happened on both sides so we did not find the time to meet up online.

My thoughts while playing the single player campaign is that it might be a fun game to skirmish with a buddy or do some 1vs1 games to battle it out. The hard part might be to persuade friends to buy it.
5/10

The verdict reminds me of the intro to the campaign. I kind of feel like when Lord Karthor was hit with the large cleaver of a sword in the Battle of Beckron (it’s from the story) and it never did any damage to the bad guy. This game doesn’t do any impact, at all.