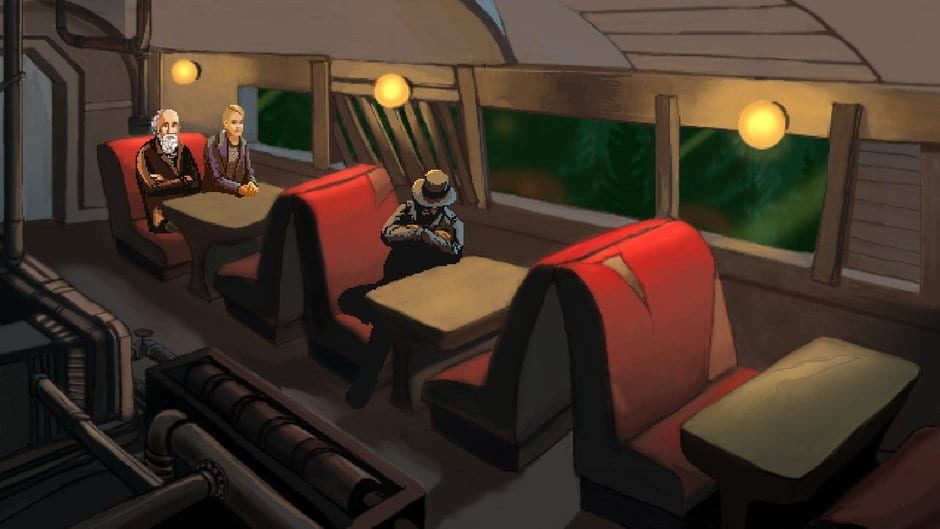 Name: Whispers of a Machine
Developer: Clifftop Games, Faravid Interactive
Publisher: Raw Fury
Released: 17.04.2019
Platforms: PC
Reviewed on: PC
Acquired: A copy of this game was provided by a publisher for review purpose

All I knew about Whispers of a Machine was the fact it is an old-fashioned Point & Click. In my mind a lot like Monkey Island – both for good and bad. Good, as in stylized and a cool main character, bad as in maybe a tad too long-driven and too far-out puzzles. Question is, did I assume correct?

Whispers of a Machine starts out with our heroine, Vera, being called out to Nordsund to help with not only one, but two murders that have struck the little town. Luckily for Vera, she has gone through “the procedure” all agents have gone through, and now can both get help from super strength and an almost X-ray-like vision that picks up boot prints, DNA and whatnot.

It soon becomes clear that Vera has quite a job ahead of her, with many townspeople being less than helpful, and obviously not liking a city-chick like her to come poking around. It doesn’t take much longer to realize not everything has been so peaceful as it seems on the surface, and that definitely makes the story a close to must-play for my part.
8/10

Whispers of a Machine features a pixelized style, with beautiful backgrounds and nice characters. Set in a post-apocalyptic sci-fi universe, Vera and her fellow in-game persons have a look to them that is both modern and old-fashioned, since they no longer have lots of the technology they had before the apocalypse. The town of Nordsund itself has also seen better days, made obvious from the looks of buildings, doors, the town’s square and the general looks of the area around. The music too, especially the background music is very fitting for the setting, and although it’s not the most amazing soundtrack I’ve ever heard, it definitely does the job.

I’m gonna start off this section with the bad news, I found the start of the game to be way too slow paced and with too many text boxes trying to explain what different mechanics were in play, although rather much failing that. I also found the smart-scanner to be a bit hit-and-miss with a lot of just dragging it around randomly and suddenly discovering stuff.

Now that the bad things have been said, let’s get to the good stuff – quite literally. As some of you might have understood (at least if you’re an avid reader of Ulvespill.net) I love games that feature choices and consequences. And Whispers of a Machine does just that. How you interact with the townspeople affects Vera’s personality and seemingly happenings in-game.
8/10

As a point-and-click, Whispers of a Machine features very basic controls, with everything being controlled by mouse input. Obviously, this makes it hard to mess up the controls section, and this is just the case for Whispers of a Machine. One small thing I missed was an option to adjust the sensitivity in-game instead of in the Windows settings, but otherwise, it’s not much to complain about.
9/10

Whispers of a Machine has definitely been a pleasant surprise for me. And although I didn’t boot up the game with the highest of hopes, this suddenly can compete for the surprise of the year for my part. Sure, it’s not perfect, as the game starts out a bit slow, and the gameplay might be a bit too dependant on trial and error, but all in all Whispers of a Machine has turned out to be quite the game, and especially considering the fact it’s not a triple-A studio who’s behind it.