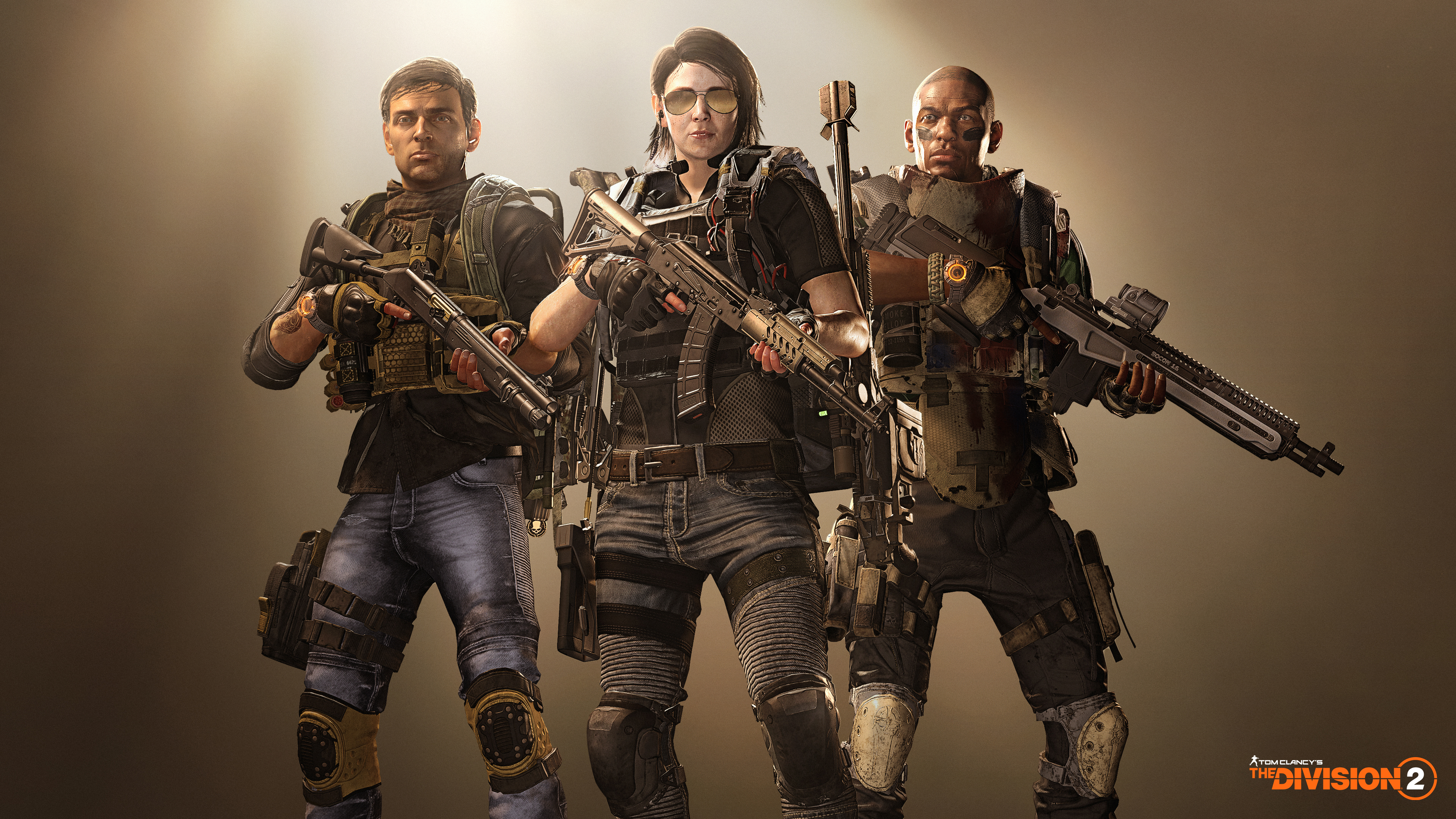 When I first heard that there was going to be a Division 2, I barely managed to stay seated, because of the excitement, and ever since, I’ve done nothing but wait. When the beta came around, I wanted to play everything! But, I held back and only tested the first couple of missions, so I wouldn’t spoil too much. So when the game finally released, I couldn’t wait to play! And boy if I’ve played it… Just look at when this finally got released.

The story is as good as expected. six months after the initial breakout of The Division, everything is going to hell back in Washington. As the good SHD Agents that we are, we rush over to help out. Once there (basically you arrive there just as the first bit of your prologue is done, about five minutes into the game) you need to get to the White House. Which after a quick fight, as some Hyena enemies are attacking the place, ends up as your base of operation. You quickly learn of this new virus, that was made and sent out as a remedy of the green virus of the first game, actually made things worse. And now, so long after the initial outbreak, people have started to rebuild and survive. Other groups, however, just want to leech off the rest, and plunder and steal what they can. This is where your job comes in. Make the people living in settlements around town have a better and more secure future by taking out enemy areas and at the same time help build improvements. Now, I could go into details about the whole story, and even what happens at the end game, but I myself hate spoilers, and I will not spoil too much myself. What I can say though is that the story, if you take the time to listen to cutscenes and read/listen to voices, is good and solid, and gives meaning to all the running and shooting and even, every now and then, and a lot in the end game, death, and failure. If you played the first installment of the game, you might be familiar with the lack of content at max level. They’ve really learned from that and instead of ending, the game truly begins once you hit that lovely 30 and finish off the last couple missions in the city. And as the weeks have gone by since release, even more, stuff has been added in, and there are already new things on the map that gives a pointer of things to come.

The game looks and sounds beautiful. You run down the streets and your character runs smoothly in front of you (third-person view) while you look into a beautifully destroyed park on one side, and some houses covering the other side of the street. I haven’t been to Washington, but apparently, it’s supposed to look a lot like how it really is, just you know, post-apocalyptic. And as far as I can tell with no knowledge of that city, they’ve done it very well. The monuments of the city are with us as well, and you get the option to zoom in for a better look. I guess the only points I know about it is the Lincoln Memorial and the Washington monument. Both present, and in the right places. All around the game looks very good and makes you just want to kick arse so you can save this beautiful area.

Now, the soundtrack is also good. The animal life still in the city can be heard (and seen) as you run around, giving off a good vibe. If you want a fight, you can always follow the gunshots you just heard, and the city is somewhat alive, even though it’s post-apocalyptic. The voice actors are also doing a good job giving life to the characters. The only negative thing with the soundtrack, and it’s a tiny one at best, but still there, is the fact that when you’ve unlocked a new operator in a settlement, and you go over to talk to them before they take off to your home base, the background noises tone out, and the voice acting sounds like it’s done in the middle of a hangar or something. Luckily this will only happen about eight times, and it’s just short cutscenes. Still managed to irritate me a bit though.

You start out with a little prologue/tutorial. Here you help defend against a new attack, and you get told what to do the whole way through. In the end, enemies are coming in from the sea, and SHD agents get a call for Washington at the same time. You’re being sent there and you leave the others behind to fend off the rest of the enemies. Next, you find yourself at the outskirts, on your way to the White House, where you end up flanking an attacking force trying to take over. You beat them off and get inside the White House where you start the actual game. This is also where you can join up with others if you want to play in a group.

Early on you are to secure settlements and build up the friendly communities, and you do this by taking over points on the map, completing side- and main missions and by finding resources you can give to control points. The fights are fun, even though it goes from overly hard to super easy and then back again, depending on what gear you’ve got and how outdated it’s become as you’ve leveled. Aiming is simplistic, but as with most games of this genre, it’s a lot more dependent on how much damage your weapons do, and how much damage the enemy is able to return to you, more than how good your aim is. There’s a range of weapons to use, from Sniper and DMR, AR, SMG, LMG, Shotgun, and pistol. As well once you reach Tier 1 you will get a specialty, where you get another Sniper, a crossbow or a grenade launcher, depending on what one you want to play.  Personally, I’m a fan of the LMG’s, AR’s, Snipers and SMG’s. The LMG’s are a proper pray and spray, mostly with a lot of bullets you can use to not only do damage but also to keep the enemy behind cover until your buddies are ready to flank back. The AR’s are built to do some precision shooting at mid-range, with either single, burst or full auto modes, they bring some good damage to the table. SMG’s work as a close-up panic button where you spray them down as the enemies rush to you. Snipers go as huge damage and extreme headshot damage where you, at least before the top tears, can one-shot most normal enemies at a distance.

Once you’ve done all your sent out to do, you will find yourself at level 30, and the strongholds will be visible. Complete these three, and then, welcome to the start of the end game, also called Tier 1. Everything changed, take a look at your map now. I don’t want to spoil too much of the end game, as, if you’re reading this, your probably thinking about playing the game, and this is where stuff gets interesting. What I will tell you about it is that you get your gear, you improve and you progress through the tiers by completing strongholds. Tier 5 that got out a bit after the initial release improved the game once again with even more stuff to do, another game difficulty and even more to do.

Dark zones from the first game are still with us, Bringing in the farm with a possibility of PVP, but so far, and according to the developers it will not become the way you have to go for the best gear. Additionally, you have some 4v4 PVP you can queue up for, with domination, team deathmatch, and other game modes.

All in all, I’ve utterly loved this game so far, and I am looking forward to where this is going in the future.

There are quite a few controls to think of in this game. Most are pretty common though. Aim and shoot with the standard mouse buttons, change weapons with 1,2,3,4 or by scrolling your mouse wheel, move with WASD and so on. Some others might be new to you if you’re new to these kinds of games, but if you find any you want to change, that can easily be done from the settings. Personally, I like the standard setup, and I’ve played other games like this, so I had no problems with it. Everything important during fight scenes is set up around your movement keys for easy access to the different abilities, taking cover and so on.

Well, I guess there are different ways to look at the replay value here. Coming back for more gear farming and progress in the end game, and making another character to get up. Personally, I’ve done both. Mostly the reason to try a new character would be to basically try to do things differently, or to test out new combinations of gear at a lower level, or perhaps you get a friend to start and you wanna level up together. The replay value of the end game is way better, as new stuff keeps coming out, and unless you’re sick of the game, there’s always something you can do. Daily and Weekly missions, clan rewards to complete and more. There are also a few things to collect around the city.

All in all a good game well worth the time you spend in it. If you plan on playing, it might be an idea to get some friends in, or join some community already playing, as it’s always better with friends than it is playing solo, and we all know that playing with randoms is a risky way of life. The game looks aesthetically pleasing and puts you right in the mood for some liberation of Washington.