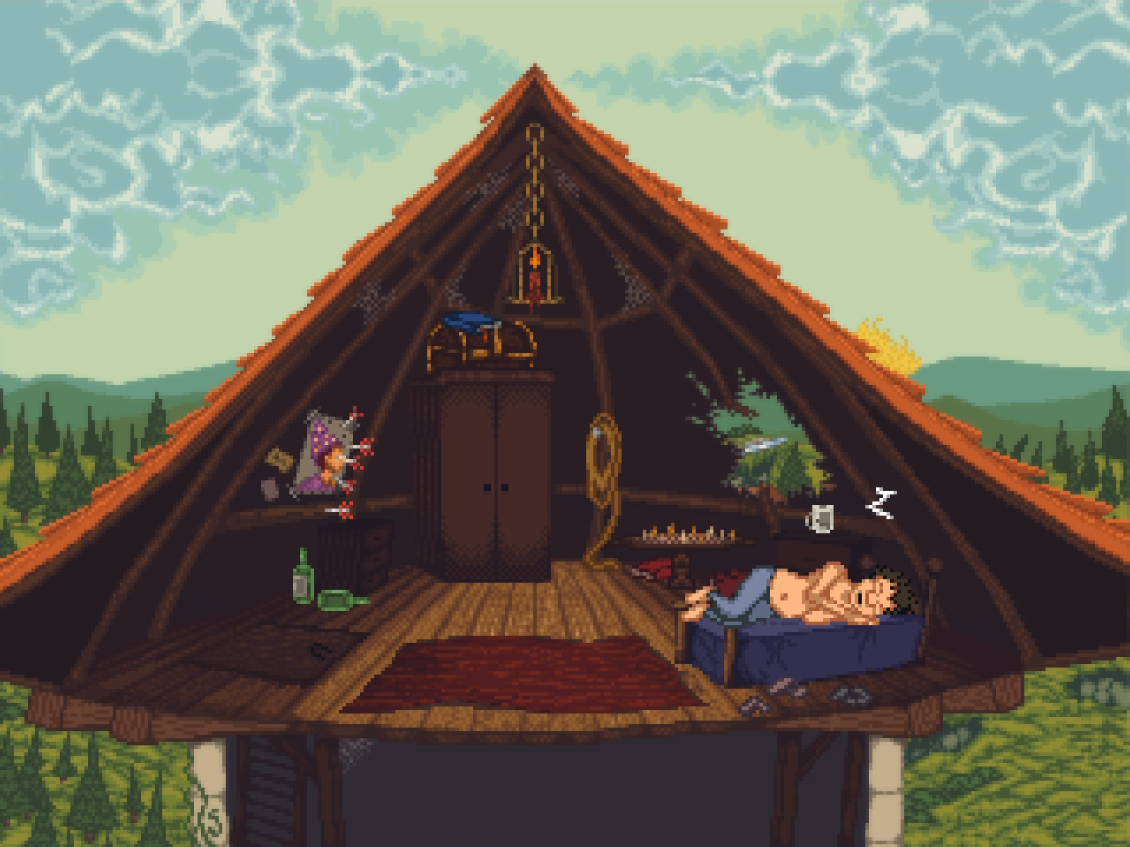 About a month ago I got an interesting email in my inbox – a question about whether or not I was interested in point-and-click games. Obviously, the answer is yes, a good point-and-click is something I definitely enjoy. And a game that focuses on actions and consequences is among my favorite genres. The mix of them must be awesome, right?

In Guard Duty, we play as Tondbert, a loyal guard at the Wrinklewood Castle, who’s having a rough day. And then suddenly, we’re not. We’re thrown 1000 years into the future and now play as Agent Starborn, a member of a resistance group, who’s on a journey to take back Earth from evil.

Personally, I found Tondberts story to be the more fun one to play, it’s not necessarily the best story ever told, but it has fun moments and gives the game a boosted start. Agent Starborn’s story is far from boring, that has to be said, but it feels slightly less original and less polished than it’s Medieval counterpart.
7/10

Guard Duty sports an old-fashioned pixelated style, and that it does close to perfection. The amount of details is simply amazing, with flickering lights and leaves blowing in the wind to name two of the examples. Sure, the game is “only” 320×240 pixels, but it turns out that’s more than enough to give the characters a distinct look and the world to feel alive. If not very realistic.

In addition, there’s the soundtrack and -design that Sick Chicken Studios has almost perfected, especially in the Medieval part of the game. It feels really medieval-esque, yet it feels contemporary. Finally, there’s the voicing which is really good too, a Tondbert that has an allergic reaction is probably the greatest impression I’ve heard in many years. You know, in addition to the general voice acting being pretty much top-notch too.
9/10

As with lots of other point-and-click games, Guard Duty has an interesting logic, to say the least. It’s not illogical but it’s a mild kind of the Rubber Ducky-puzzle from The Longest Journey. That being said, however, it’s just why I like games like this. It’s something I like about the quirkiness of the puzzles in these games, and Guard Duty is no worse than others in the same genre.

I’d also like to talk about the fact this game focuses solely on the main story and nothing on the side. You’d think that this is bad, but in my opinion, this is something that suits Guard Duty excellently. I don’t need The Witcher 3-like side quests with this kind of game. By all means, side quests aren’t a bad thing, but the fact that Guard Duty shows that games don’t need to be 50+ hours is truly a joy for my part.
8/10

This is quite self-explanatory, as a point and click game Guard Duty is controlled with pointing and clicking the mouse. Either you enjoy these kinds of games or you don’t. For my part, I like it, actually, I really like it!

This allows for an easy to learn (and master) control system, that’s precise and intuitive. Yes, it does at times feel a bit old-fashioned, but not necessarily in a bad way. I really just have one small thing I miss from the controls, which is the ability to change what the mouse buttons do – I don’t know if that’s even possible, but if it is, that would have rocketed the controls into perfection.
9/10

In theory, Guard Duty should have an awesome amount of replay value. In practice though, it’s not as good. Again, it’s far from bad, and there are some consequences, but the game does feel to have walked straight into the “Telltale-trap” with the consequences only being skin deep, and not that huge. I must admit I have only played the game once, so I haven’t seen what differences could happen, but it feels like my choices are less than important in where the future is headed anyways. There are consequences yes, but not as big as I wished for.
7/10

For a game that sells for just $9.99, Guard Duty is certainly great. Hell, it would be great for twice the price! The story could be a bit more solid, I will admit, but it’s good and the few “issues” I have with it are very minor. I do also wish for a bit more consequences that actually matters. On the positive side Guard Duty looks stunning, with a style that’s done properly. And with a soundtrack that fits excellently. The gameplay too is great, with interesting, fun puzzles, and a focused main story to tell. All in all Guard Duty has been a pleasant surprise, and I can only advise you to give it a try yourself.