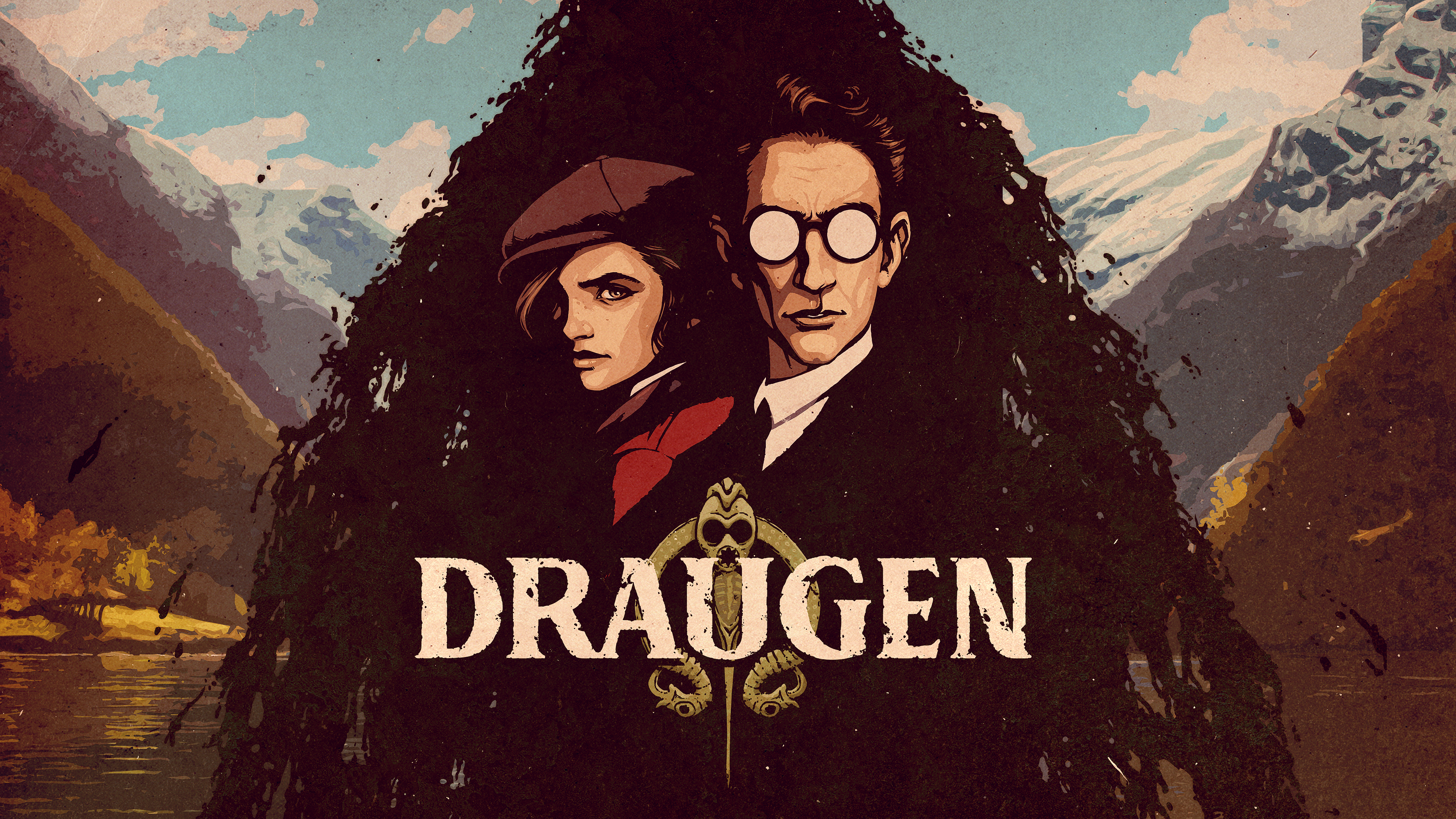 Draugen, the old monster of a fisherman taken to the next life while out on the sea. What can he have in common with a Fjord Noir game from Red Thread Games? They’re both called Draugen, and they’re both very Norwegian, but do they have anything more in common? And more importantly, is the game as interesting as the old tale?

As you might have understood by reading my reviews from earlier, I really enjoy a good story. And luckily, Draugen features just that. You play as Edward Charles Harding, an American traveler, on a quest to find his missing sister Betty. Joining you on your journey is Edwards young ward, Lissie. An energetic woman, to say the least.
The journey to find Betty has taken our heroes across the pond, through Aalesund and now to the small village (if it can even be called a village) Graavik. Upon their arrival, it quickly becomes obvious that something has happened in Graavik. Not a single person is to be found, not even inside the massive farm, where Lissie and Teddy seek shelter from the incoming storm (or summerlike weather as we call it in Norway).

As with a lot of other story-heavy games, Draugen is difficult to talk about without massive spoilers. I will, however, try to give a short summary of what to expect. You discover the last months’ happenings in Graavik, and why you are yet to find someone. A close relationship that has gone bad, and several disasters that have shaped Graavik for eternity. And then there’s the mission to find missing Betty. In other words, a hefty portion of happenings and drama to grasp.
9/10

First of all, I want to talk about the musical score in Draugen. Which is, simply put, close to perfection. Simon Poole has done an amazing job in capturing the 1920’s feel of Norwegian music with a soundtrack that will stay with me for a long time.

Then there’s Graavik itself. Which is a stunning place, which looks a lot like a Thiedemann & Gude painting, with an immense amount of detail and a true Norwegian feeling. The weather is very Norwegian, and the buildings and general look of the village looks a lot like my experiences with old Norwegian villages. Plus of course, the goats, the goats are amazing.
Finally, let’s talk about Lissie, who’s the main focus of attention. She’s lively, she feels like a true youth with a heart for exploration and a mind that wants to learn and question everything. With a motion-captured spring in her step, she actually feels alive. She’s high and low, climbing and running about, yet when things get serious, she’s interested in finding out what has happened and solve the mysteries of Graavik. The one small annoyance about Lissie is the lack of details when she speaks, with a mouth that moves very far from natural and in-sync with the sounds coming out.
9/10

Objectively, you could say that Draugen features some very simple gameplay, and therefore should be granted a low score. In my mind though, that is just what kind of gameplay Draugen needs. As a walking simulator, with exploration and mysterious happenings to untangle, the gameplay is focused and rather straight to the point.
In addition, the game sports a creepy feeling, with myself awaiting a scare at any moment, not necessarily in a jump-scary way, but more like the feeling of something being very wrong, kinda like the feeling I got exploring the Greenbriar Estate in Gone Home. Summing up the gameplay would be a little like this; walk into houses and read letters from people who are no longer present, think, talk with Lissie to get a partner to challenge your thinking, and then go to the next house and do exactly the same. Simple, but fitting.
8/10

As Draugen is a so-called “walking simulator” the controls are simple, yet effective. The walking part is pretty straight forward, with controls that feel responsive and very well set up, even by the default settings. Selecting what to look at, interact with, say and whatnot is also very simple, with a press of a button. In addition, you can choose to play with either a controller or keyboard and mouse, of which I preferred the first option. There’s only really one small thing that was less than ideal, namely the fact you need to hold down any given button for it to actually be selected. Although I support the idea with holding buttons instead of simply pressing them, in order to avoid wrong presses and selections, the waiting time is way too long for my liking, seemingly without any way to do anything about it.
9/10

This is the part where Draugen has some trouble, once you’ve played through the game once the “twist” is known, and a second playthrough becomes next to meaningless. Unless you’re into just walking around watching the beautiful scenery and music.
That being said, Draugen is most likely made to be a “one playthrough” kinda game. And because of that, I will not give a score on this section.

To answer my question from the intro. Well, they’re both a bit creepy, they’re mysterious, and they’re both something Norway should take close to heart. However, Draugen (the monster) is something you’d want to stay away from, while Draugen (the game) is something you should seek out and let take you away on a trip like no other. In addition, Draugen (again, the game) looks amazing and allows you back to life once you’ve uncovered the mysteries. Although not the objectively among the best games I’ve ever played, it is certainly up there fighting with Hellblade, Life is Strange and Gone Home subjectively.