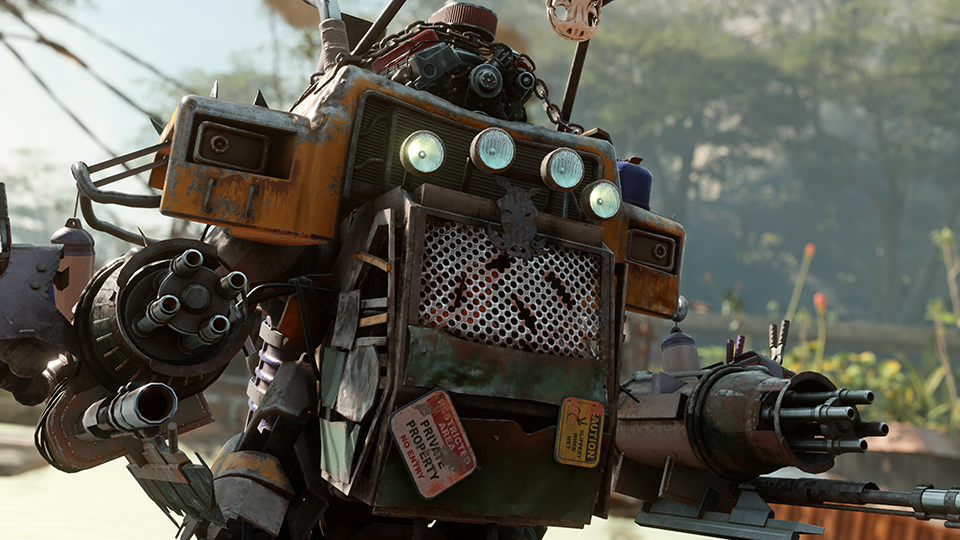 Name: RAGE 2
Developer: id Software, Avalanche Studios
Publisher: Bethesda Softworks
Released: 14th of May 2019
Platforms: PC, PlayStation 4, Xbox One.
Reviewed on: PC
Acquired: A copy of this game was provided by a publisher for review purpose.

When we got our copy of RAGE 2, I figured this looked crazy enough to be a funny game, and promptly said I could do it, even though I must admit, I never did play the first game. What I’ve learned from my time in-game though, there’s no need to play the previous one to truly enjoy this.

It starts out easy enough. Shits going down and you have no idea what you’re capable of, but don’t worry, there’s a tutorial! And, your in-game character knows more or less as little like you, seeing as you quickly come to realize you’ve been kept in the dark. After the initial tutorial, ending in a glorious way with so many of your fellow citizens and military officers dead after the stronghold have been attacked by a strong enemy, (From what I’ve been told you thought that guy died in the first game) you learn more about yourself, and you’re set to go out in the world to fight back the threats of the world as well as explore all over the world, enjoy some racing or maybe you want to be the famous gladiator everyone watch on their televisions? Either way, you still gotta kick some arse to make the area safe, and you do this in a sequence of missions, which may or may not feel a bit repetitive.

Enough about that though, we do not want to spoil everything. As you progress through the story you come across a bunch of companions who help you along on your way, and you have to help them gather enough intel, materials, or just bash some heads in, while they build up one of their old blueprints together, for an ultimate weapon. They have their own good personalities, bringing in a good share of humor to the table.

All in all, the story might feel a bit repetitive, but it’s solid and brings you further into the mayhem that is RAGE 2. In between the killing and driving and exploring, the NPC’s add to the insanity with their bewildered thoughts and ideas.
8/10

There’s not that much to say about the graphics, other than the fact that they look astounding. Yes, most of the map is a barren wasteland, but it’s depicted in a nice manner. For some reason, everything gave me a feel of the Borderlands franchise, just without the paper-cartoon characters. As you’re driving along the countryside you pass beautiful canyons, small towns that look like they’ve been abandoned for ages (usually there’s enemies and loot crates there), and other things that catch your eyes. Then the next second you’re driving along some swamplands and wetlands, where water is covering parts of the roads, and, your car actually experiences a speed drop if the water gets too deep.

Over to the soundtrack now, again, the music tracks fits perfectly and makes you perform during a battle, or just chill while you’re watching the view. There’s not a lot of ambient sounds in the game, I still haven’t found a bird or anything so that might be why though. Then again, you will know exactly where you heard that one last lurking enemy, so there’s that. Also, the voice acting is on point. The actors bring life to their mentally deranged characters which beautifully adds to the menacing world you’re surrounded by.
9/10

Well, the gameplay. Damn, the gameplay! Well, this is why this game is as fun as it is. Yes, there are some major distances you have to travel by car, which can get tedious. But, when you get there, jump out of your car (or maybe you stay in it and fire with the array of weapons you got on your vehicle) and start fighting whatever enemies waiting for your arrival. This is where the fun is at. A challenge for sure, as enemies, grow tougher and stronger as you progress in the story. Sometimes, they get stronger faster than you yourself get the same amount of gear and skills to compete with them. This is where your brain comes into play. Jump, shoot, dodge and laugh as you continue to slaughter them all!

As you level up and progress with the different main NPC’s of the game, you gain skill points for different tech trees giving you improvements along the way. Finding vaults gives you upgrade tokens, new skills like the initial dodge, sliding, power punch and so on. The upgrade tokens can be used to improve your weapons and skills. You can also get vehicle upgrade tokens to improve those as well. Basically, as you progress, everything YOU gets improved. So don’t worry, the enemy can feel hard, but at one point, you’re the badass one!

Again, at launch, this game could look like any other. A cool game which would grow old after a while, but fears not! Previously we’ve covered the road map ahead for this game, and it is packed with stuff to come. As I’m a bit slow with this review, some of these things have already been implemented into the game, and thoroughly improved it already! If you want to know more about the road map ahead you can check out our news article here and the recap of E3 here. All in all, these implementations throughout the year, will continue to bring the gameplay of this game from fun but tedious, to straight out fun madness.

We can’t end this section without going further into detail about one little thing though. The madness of the world of RAGE 2. It truly is a landscape of destruction, insanity and utter madness, shown throughout the game through the story and the gameplay itself. How ruthless both your enemies are, and your allies as well. How barren and unforgiving the landscape itself can feel like adds to the mayhem and madness, even though there’s no real survival in the game.
9/10

Pretty standard, you walk around with WASD, you shoot and aim with the standard mouse buttons, you interact with stuff with F, jump with space and so on. Hold in Q for easy access to your full arsenal of weapons and choose with your cursor, or press Q once to change between last two weapons used. Basically, the controls are like most games in the genre. If there’s something you do not like, however, it can easily be changed in the settings menu. The controls are sensitive enough and react in-game as you press them. The only thing i wanna point out as a possible negative, and this might only be for me, but while driving, it feels a little more unresponsive and makes the driving experience a bit more challenging than it needs to be. Again, this might only be me and my inexperience with driving in games like this.
8/10

Well, if we take on the initial game first, the only real replay value you had was to do another playthrough with a higher difficulty setting or perhaps just play you’re completed save to get all the collectibles and achievements. But, as we all know by now, there’s plenty more to come in this game, and some implementations that’s been done already. These bring in new challenges with nice in-game rewards, giving us all plenty of reasons to keep coming back to this game. All in all, the fun of just bashing skulls, jumping out of a rain of bullets to turn around and finish them all off with some juicy headshots, or just to enjoy the landscape and viewpoints, all while having new things to do, will bring me back for more replays in the future.
9/10

The game is well worth your time, with loads of hours of fun to be had, all while enjoying the madness. With constant updates and implementations your set for a good experience for a while still, and the road map full of updates is free for everyone, leaving you with a good game for an initial price, instead of constant DLC content for a small amount of yet more cash, that we’ve seen become the standard over the last couple years. I’m gonna kick back and enjoy myself a nice drive across the lands, hopefully meeting a challenging enemy as i go as soon as this is complete. So if you like these types of games, I would say this one will not disappoint.