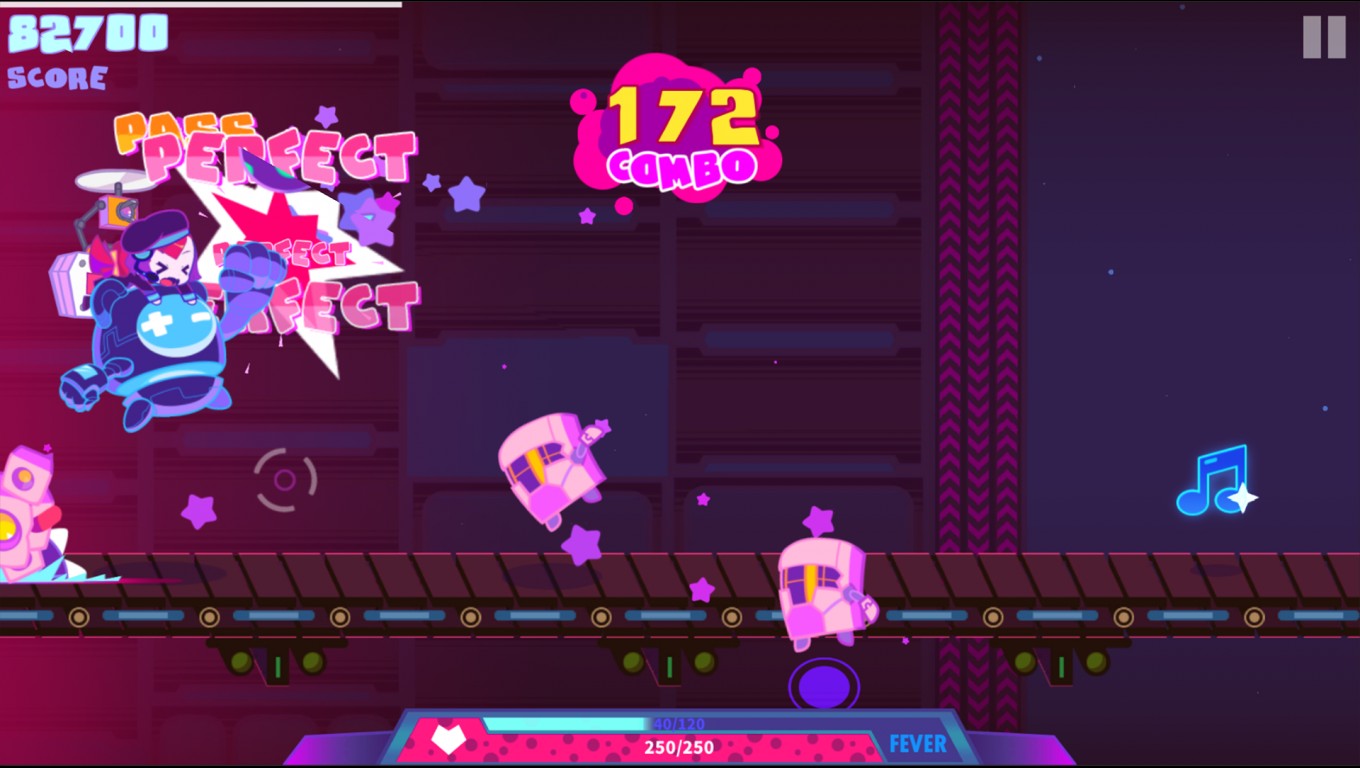 I’d say that Muse Dash has a style that will either be loved or hated by any given player. Either you like the anime style the developers have gone for, and which they’ve let flow through the entire game. Or, you very much dislike the anime style, but then you’re probably not gonna consider this game anyways.

Muse Dash delivers a huge amount of so-called “game juice”, with sparkly colors, sounds and explosions all over whenever you interact with anything on-screen. Again, this is something that you’ll either like or dislike, massively. Personally, I think it fits the game very well and therefore I’ll give the game “a plus point” for this.
8/10

The whole game is buildt up around the music. And so, the gameplay focuses around hitting these beats with each stroke of the corresponding button. Honestly, that’s pretty much it. Play through a level and try to get the highest score possible. Did you get a high enough score you unlock the next level and so the game goes on. In other words, Muse Dash contains simplistic yet fun gameplay. If you’re looking for just a “brainless” timewaster (in the best meaning possible), then you’ll definitely get it with this game.

Unfortunately, the mobile-game tendencies start shining through after not too long. Muse Dash falls a bit short when it comes to longer sessions for my own part. It’s not necessarily boring, but it lacks that extra to keep my interest for more than an hour or so at a time.
7/10

Gameplay wise, Muse Dash is controlled with two (!) buttons. Yes, that might sound way too few buttons to actually be in any working state, but believe it or not, the game simply doesn’t need more than two buttons to be controlled. At the very least the two buttons you need to press during any level are responsive.

What I do wish for though, is the ability to play with a controller. It might just be me who’s clumsy and stupid who can’t get my controller to work, but I’m assuming I can’t be the only one? (Please let me know if it’s possible, and I just haven’t discovered it.) Playing with a keyboard isn’t bad, but I think an optional control scheme would be preferable.
7/10

As you might have already understood, Muse Dash centers a lot about getting streaks, high scores and unlocking more levels. It’s very much like Guitar Hero in that matter. Well, you don’t get a grade like in Guitar Hero (if my memory serves me correctly, I haven’t played Guitar Hero since “World Tour” on the Xbox 360), but the higher score you get the more lights and sounds and general “game juice” you get. And playing through each level to get a higher score is definitely something that putts the replay value higher for my part.
8/10

I must say I am very pleasantly surprised by how fun Muse Dash turned out to be. Although not the most impressive game, neither gameplay wise nor graphical, the game turned out to be a lot of fun and a game you’ll definitely like if you just need a “timewaster”. Personally, I think I’d prefer playing it on a mobile device or the Nintendo Switch, as this feels more like an “on-the-go” game, but it’s not bad on a PC either. The replay value too is high, and setting a new personal best score is always a pleasure.