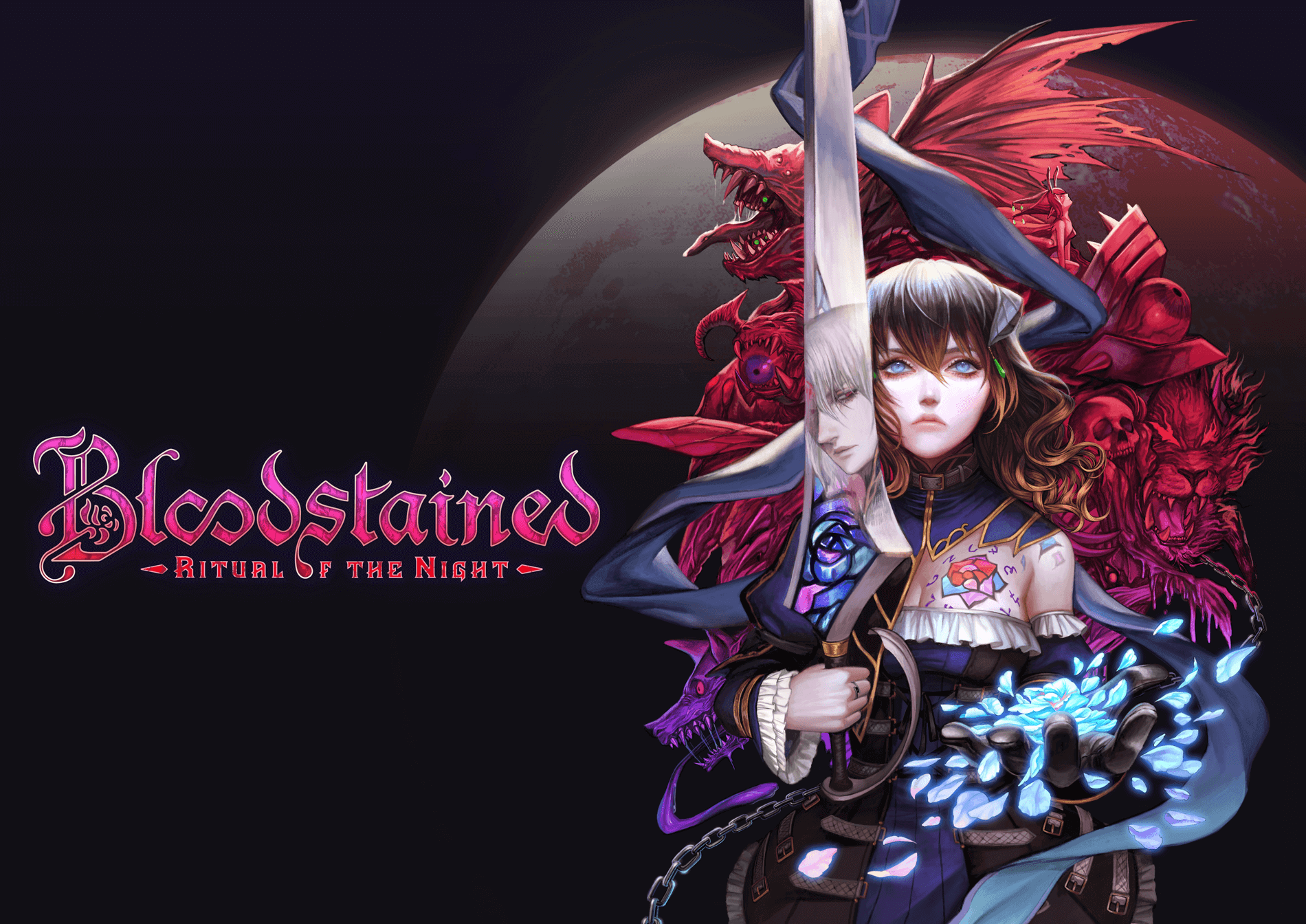 Name: Bloodstained: Ritual of the Night
Developer: ArtPlay
Publisher: 505 Games
Released: 18.06.2019
Platforms: PC, PlayStation 4, Xbox One and Nintendo Switch
Reviewed on: PlayStation 4
Acquired: A copy of this game was provided by a publisher for review purpose

Castlevania: Symphony of the Night is for someone of the best games in the franchise, and even the best game that was released on the original PlayStation. It helped to form how Metroidvania games are supposed to be made for years. While the Castlevania franchise changed during the 2000s, many just wanted it to go back to its roots back to how Symphony of the Night was. So it didn’t come as a surprise that many were excited when the series producer Koji Igarashi announced that a Kickstarter would be made to make a spiritual successor named Bloodstained: Ritual of the Night. So before this introduction gets too long, it was in early access for a while and is now fully released and I have played it.

Bloodstained takes place in 18th century England during the Industrial Revolution. Fearing the loss of their influence over their wealthy patrons, the Alchemy Guild researched methods to summon demons and created Shardbinders, humans forcibly fused with demonically-charged crystals that attuned them to their powers. These Shardbinders were sacrificed by the Guild to summon demons from Hell in what was meant to be a scare tactic but instead brought uncontrollable destruction that wiped out the Guild and much of England until the Church was able to banish them. Of the sacrificed Shardbinders, only one named Gebel survived. Another Shardbinder, the main protagonist Miriam, is spared due to falling into an unnatural slumber before she can be sacrificed.

Ten years later in the game’s present-day, Miriam has awakened from her slumber and has learned that Gebel has summoned the demons to destroy England as he seeks revenge on the surviving alchemists for what they did to him. Accompanied by Johannes, a former member of the Alchemy Guild, they sail across the ocean to Arvantville, a destroyed village on the outskirts of Gebel’s castle the Hellhole. They meet with Johannes’s friend Dominique, an exorcist who helped Johannes care for Miriam during her slumber and has been sent by the Church to help them stop Gebel.

The story is being told with a mix of cutscenes and interactions between characters combined with text and voice over. It works as a good way to evolve how it was being done in games in the same genre. The voice acting is pretty good and suits the characters, and when I heard the voice of David Hayter I was sold. The story feels like something that belongs in the Metroidvania genre, which I guess was what they aimed for. It might not be spectacular but it works as the red line to the gameplay.
8/10

Instead of making sprite-based graphics that we have seen in earlier games, they have now made it in a 3D cel-shaded anime style that helps to make it actually look like a new game. It’s dark but also colorful giving life to the environment. It keeps the same atmosphere that previous games are known for, and details wise have seen a major update since its early access days. There much more that is happening in the background now, with also great variation in the atmosphere. Choosing a new graphic style was a risk, but I would think in the end it was worth it. There some issues at the beginning with stutters stops, occasional tanking framerates and unexpected load times. While not a deal-breaker they were there, but much of the problems got better after a patch was released. It runs much smoother and is beautiful too look at. The soundtrack feels natural and was composed by Michiru Yamane who is no stranger to Castlevania music.
8/10

Bloodstained plays really close to Symphony of the Night obviously, with many of the core aspects still remaining in place. Fans of the series will pick up and play and everything will feel natural. A simple leveling system means you are constantly getting stronger the more you explore and find new items and equipment. It rewards exploration and you will have to find the right items to proceed to previously unattainable areas. Along with RPG elements where she gains experience levels to grow stronger and use different equipment to further alter her stats. The enemies she kills have a random chance of giving her their shard, and those who have played Aria will know this is the soul system with a different name. There are different colors for shards that designate how the player will use them. Some summon familiars, some are offensive tactics and others serve as passive stat boosters. The variety of shards are fun to play with and check out. For people who wanted a Symphony style 2D Castlevania, Bloodstained is a dream come true. The castle and its various areas a joy to explore, even if some of the layouts are a little strange with some things such as an underground desert. The sense of exploration and searching for secrets is able to recreate the same magic. But while Bloodstained succeeds in bring back the same magic that players felt in 1997, there are elements that might not get as praised in 2019. Like the saving feature, that I feel belongs in the past being the only checkpoint in the game is the last point you saved. Which creates situations where you die and have to start over a small portion. The save points are well spread, but there is never a good feeling having to start over again after dying.
8/10

Bloodstained controls just as you would expect and long-time fans will recognize it immediately. Even old tricks that were previously used are still present, which helps with the feeling of the game. It’s tight and responsive. I have no idea how to explain it furthermore, but if you have played a Metroidvania game before you know how it controls. There is the usual jump, two types of attack and a special attack and evade. That is being used to traverse and fight, and as said is familiar. The only thing I reacted to not being a huge Metroidvania player, is how stiff the attacks felt. What I mean by that is when you attack it feels like the character freezes making me often pressing too early ending up missing and then getting attacked. It might be my lack of experience or it is something many more feel the same about. But yet again it does what it is supposed to do, capturing the feel of previous games.
8/10

With a huge amount of items to find and gather, there is obviously not time enough to use it all. But, if you don’t feel that you have had the chance to play it all there is a new game plus mode. Character level Equipment, Map progress All items, ingredients, and crafting materials carries over making it easier and worth to play through once more. It is perfect and really makes the replayability strong. Enemies will obviously be stronger than your first playthrough but so will also you.
9/10

Bloodstained: Ritual of the Night delivers in so many ways what it aims for, the core DNA of Castlevania breaths through it all. It plays it safe with what new it brings, but also with what they wanted to change. Old fans might find the most entertainment from it, but it also welcomes newcomers to a piece of gaming history. The story might not blow you away, but the core gameplay is more than enough on its own. We will just have to see if this is something that will develop to a franchise, and might take bigger risks in the future.