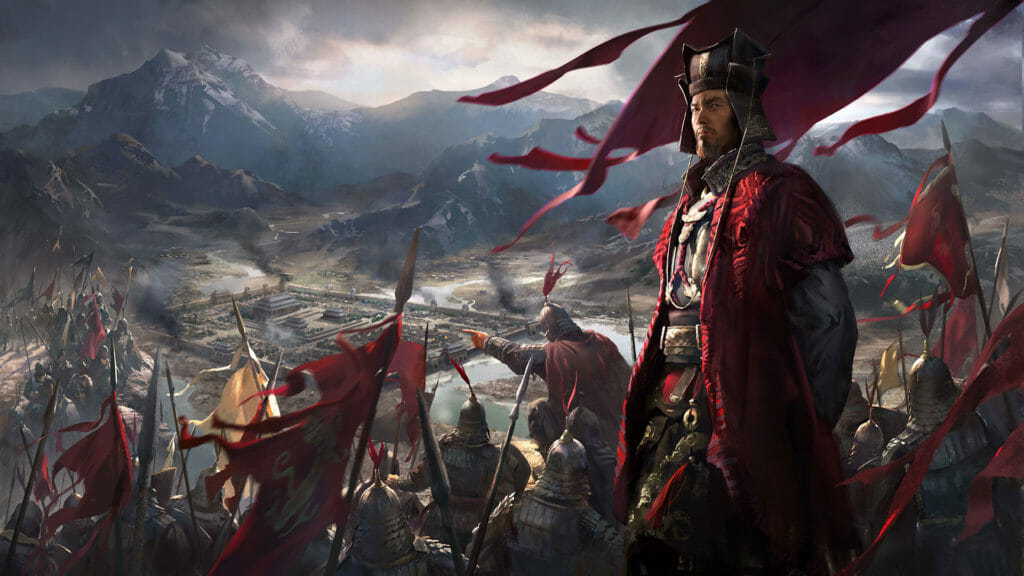 I’ve been waiting for this game since the day it got revealed, as I am more or less in love with this series. As such, the choice about who to do this review landed on me. Even though a lot of other things have been going on, I’ve managed to sit down and thoroughly enjoy this game!

Like all the games in Total War, they go somewhat into the history of the area and era they make their game about. What happens after you’ve started up will abbreviate from this, as it’s not meant to be repetitive as you go through several playthroughs. Three Kingdoms is set in ancient China, where your goal is to be the one true ruler of the lands. I’m not that familiar with this particular part of history, so whether or not they actually keep with the real history on this one, I’m not sure about. Nevertheless. The story is basic and standard for these games, with just enough to keep it entertaining as you build up your faction and conquer the map by whatever means necessary.

For a while now, They’ve tried making the games with a map looking as lifelike as possible, which have been all good. This time however they’ve somewhat returned to the good old map that I got used to back when I played my first Total War game. This does not set the graphics back however, as the map gives us some nice art all in the familiarity of Chinese culture from that very era. Of course. It’s not like the map in Medieval II and those old games, as it still shows off with decent up to date quality along and beautiful mountainsides and such.

I’m not the biggest strategist around, so I’ve only meddled with the real-time battles. But the soldiers and structures and such are really well made showing off some good details if you zoom in on them, and the destruction of battle can easily be seen.

Onwards to the soundtrack. Not shockingly, they’ve added some nice music fitting of the era and area in question, giving you the right mood to really dig deep into this game and get lost for a couple of hours. There are some voice actors, telling you the lore of your faction in loading screens, giving out advisor help, or telling you about the most important news.

While out on the map, checking on your cities and such, or perhaps moving an army to its destination, you can hear some ambient sounds of the army moving, possible birds in the area and such, but there’s no abundance of ambient sounds as such. Again, it’s a little bit different while in real-time battle. There you can hear all your soldiers moving as one, rushing, the rustling of machinery if you’re lucky enough to have them in battle, warcries and so on. Making you feel like you’re in the middle of it all.

All in all, the graphics and soundtracks of the game is right on point, not an overkill, but right there to give you a good experience while playing.

I guess we better start all the way back at the menu for this one, as the whole thing starts up there. You start out choosing one of many factions. If you’re new to the game, you might want to stick with the easy and normal factions for starters. If you like a challenge you could always go for the hard and above factions. What this means is the initial difficulty. How many enemies you start against, how big an army you start with, how much resources you already own and so on. Personally, I started as Cao Cao which is one of the easy starter factions. This is also where you put the difficulty of the game itself. Once all this is done you can move into the game to liberate China. There are different takes on the gameplay relative to what faction you start with. For me, Cao Cao has become an outcast and an enemy of the state. There’s only one thing to do, end Dong Zhuo’s tyranny and bring peace to the land. You start out with enemies on all sides but do not worry, give it a few rounds and some time to build up a proper army, and these neighboring areas will soon belong to you!

As you progress through the game you can do as I mostly end up doing, or you could gather up a bunch of friendly factions and take over the areas through diplomacy. As mentioned above, I’m not much of a diplomatic person, so I tend to wreck my way through these games as a full-on warmonger. Anyways, as you start, you build some in your capital, improve your food resources and such, as well as training up soldiers for your army. No matter what road you want to go down, a big army is good. Some factions will see you as futile and refuse to even start diplomatic talk if you do not have a strong enough army, and others might be less happy to attack you if your defenses are strong. Again, personally, I build my army so i can quickly overcome everyone else.

It’s your basic Turn-based strategy game and as such, the gameplay brings you to the endgame in your own pace. Take it slow and steady, enjoy your time in ancient China and become the one and only, Emperor! As is usual in these games, your winning conditions will be to own a certain amount of cities, areas and have a certain amount of army points. These will all come with time, so just sit back, relax and get to fighting! There’s not all that much to say about neither the gameplay or the story from this point on, as it’s all up to you from here. Will you become the new emperor of China, or will you become but a bump in the road for some other faction on its way to glory?

There’s not all that much to say about the controls either. You mostly use your cursor for everything in-game and as you click around and turn your camera view it’s all easy and smooth. In real-time battle you have the possibility to speed up, slow down or stop time all together to give out your orders, which all have their keybindings set, registering and stopping as soon as you press that button (result may vary depending on your keyboard’s response time).

There are some keybindings for the different menus, such as diplomacy and such, but with the pace of the game, there’s no need to use these. If you insist on using them, you might want to change the ones you want to use through the settings, as some of the standard setups is nothing to be proud of. Diplomacy, skill tree and such is easy with the standard number buttons, but your army, missions, cities, persons and such use control+F1 and so on. As I stated above though, these keybindings will not do anything to the score, as they are completely useless considering its a turn-based game. Even the multiplayer scenarios I’ve played in the past haven’t required me to use any keybindings when you have limited turn-time.

Well, as with other games like this, you have your winning conditions, and then there’s total domination. You can continue your save after winning, to ensure you are the only faction left alive. First thing I’m going to do after finishing up my run with Cao Cao is to try again with one of the tougher factions, so you always have that as a possibility as well. They keep coming out with DLC’s just like in the older games, giving out more factions and possibly even new scenarios in the future. If all this is not enough to get you back into a little replay of this game, what’s better than going into an online play against a friend, either by knocking their arses out of the game, or teaming up into a co-op, taking over China together. If you’re into completing achievements, there’s about  68 of them on Steam. Some are easy, like going through the game, completing this and that, taking over certain areas and such, while others require you to win with several factions. There’s not all that much left of your initial game once you’ve taken everything, but there’s always round two-infinity.

A good game where you can spend hour after hour fighting and talking your way through the game. If you value your game as to how many hours you can get out of it, these games usually reach the 100-hour mark on my steam before I feel done with it, even if played as a single-player game. That being said, I usually keep coming back to them after that as well. It’s got great graphics keeping you interested while the gameplay and the accomplishments of ending your enemy can provide great satisfaction. All in all well worth my time, and perhaps yours as well?