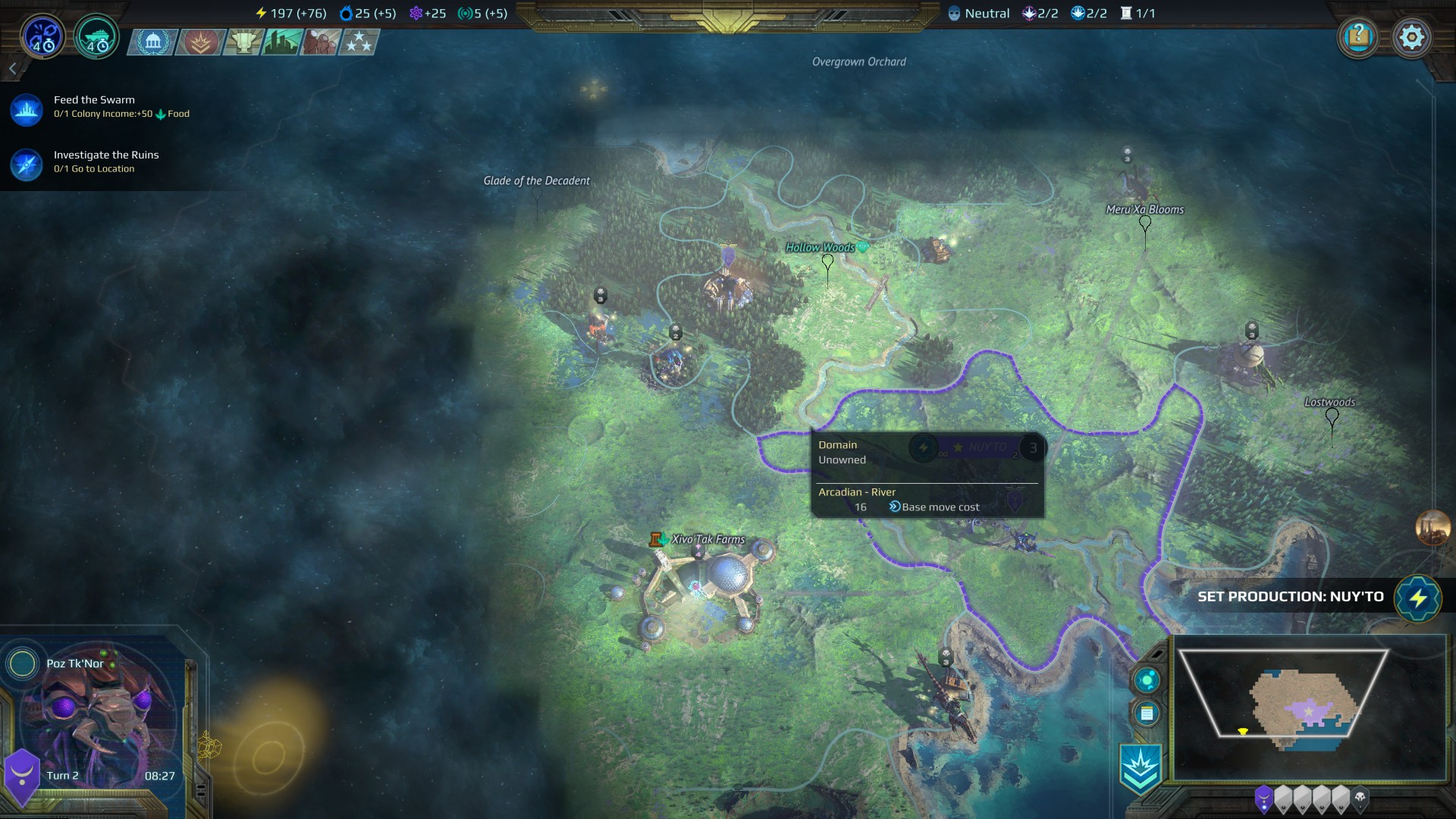 Age of Wonders is a series of games that I’ve always enjoyed playing, and watching the trailers for this new edition made me super stoked! And next, I now I am asked to review this game. Now that’s what I call a good day!

By now I’ve gotten used to ‘Turn-Based Strategy’ games without a proper story, where you just gotta kick some royal butt on your way to glory. That was not the case of this game though. You can always play the game in scenario mode, just bashing skulls for fun, but there’s also a proper campaign laying in wait for us to conquer. I will not go into detail about every part of the campaign, as we wouldn’t want any real spoilers, but there are campaign planets for every faction of the game, taking away a few hours of game time each. You get to start out with a tutorial, as is the standard, but you can skip it if you feel confident in your experience with these kinds of games. After the scenario, you unlock the three first campaigns and completing these unlock more and so on. The very top of the list (first campaign in chronological order) would be Leave-6, where you have awoken as the Vanguard after a 200-year cryo-sleep, only to get a homecoming of apocalyptic events. The planet has changed, everything is in ruins, and the realm has been split up into factions. It’s your job to get everything back together again. And thus your campaign experience starts off.

Easy to say, the game looks good. It’s set in bird perspective looking down on the strategic map where you control your armies through beautiful grasslands, forests, swamps, mountain passes and so on. It’s not realistic looking, but it got a nice artistic look instead, giving it a better feel than the realistic approach would not be able to capture. Your armies, heroes settlements, cities and every other little thing on the map is shown in good detail, for being a birds perspective strategic map that is. As well when you enter combat, you zoom into the one hex on the map, that the battle occurs on, and shows off in better detail how it looks down there. If anything is to be said, after a little while, you will start to realize that most fights occur on the same few battlegrounds, but then again, there’s nothing wrong with that. You can see your armies hit or miss their shots by blasts hitting around the area you aimed for, you can easily see what gives cover, what you can explode to deal extra damage if enemies are covering there and so on.

On to part two of the graphics, the soundtrack. There’s some sort of ominous music playing during combats, giving a vibe telling you that it’s now or never, go big or go home, kill the enemy is the only option. It helps you keep focused during the fights. There’s also the usual battle sounds of blasters shooting, melee being done, creatures/humans getting hit and so on. All in all a pretty good soundtrack during combat sessions. For the strategic map and moving about, there’s not a lot of music to be heard, but that’s not important here, because you can hear the wind blowing, birds chirping and a frog just got laid in that pond over there. The surrounding sounds are beautiful and it keeps your hope up even when the enemies are approaching in great numbers. The voice acting is also good, can’t be easy giving voices to some bug creatures which is one of the factions. There’s not much voice acting being done though, as it’s just at the start of a campaign, telling the story of the faction you’re going as.

Let us take it from the top. No matter if you choose scenario or campaign, you’re going to start the same way, just with or without set goals, and scenario gives you a bit more freedom by allowing you to define your own planet. You can also customize your own commander, just to keep it more interesting. Once you’ve done this in a scenario, or just chosen your campaign, you press that sweet play button and begin your adventure over planet dominance.

Once you enter the game, your spaceship will land, open up and become your capital city. Additionally, you’ll start out with your chosen commander and some starting troops. During the early stages, you build up your capital, expand your territory as it grows and starts sending out a colonizer or two to expand even further with more cities. Military and social research can be done simultaneously and unlocks on round two. Here you research everything from defenses in towns to new units, and social buildings increasing happiness, food income and so on. Take out the neutral armies holding strategic points around your territory early on, as these will grow stronger, sometimes faster than you. If you do the campaign, this is also where you start all your missions to improve relations with every faction and so on depending on what your goal is.

At the later stages you’ll have met most of your enemies, and you’re starting to build up a significant army. There are a few possibilities when it comes to achieving victory. Total points, domination, doomsday weapon (building a doomsday weapon) and a few others. In the campaign, it is of course to complete your current goals. I, as with all turn-based games, go for the violent approach, kicking arse from start to finish, only using diplomacy to turn a bad situation. This requires me to fight. A lot.

And that’s where the combat system comes in. It’s built up with a turn-based combat system where the defenders get the first turn to move their units, and then it’s the attacker’s turn. It continues in this manner until the fight is over. All units have three action points per round, and can either move all three of them, but not get to do an action, or walk one or two of them, and use the last for an attack or go into defense. There are more options depending on the unit. You can also use the environment to take cover and lower the chances of the enemy hitting you. Once your enemy is within range, you can start attacking. Ranged units will have a percentage of success depending on obstacles in the way and distance to the target, while melee will have to make their way to the enemy and slash away. Once you or your enemy have become annihilated you’ll leave the match and get an overview of the match.

And this is basically the game. Ending when you reach your victory conditions, leaving you victorious!

The controls are pretty simple, as is with most turn-based strategy games. You move the camera around the map with WASD, select things with the right mouse button and tell your forces to move by pressing the left mouse button. In combat, you also have keybinds for each unit’s abilities, standard bound to the number keys. You can also turn the camera angle with Q and E. There are a lot more keybinds in play, but you don’t really need many of them, as again, it’s turn-based, maybe if you’re playing with a short-timer on rounds and such though. M is to continue an army’s movement if they didn’t reach their target last round, G is to put the army in guard mode and so on. All in all, simple, effective and good!

There are endless possibilities in this. If you go for the campaign, you’ll have hours ahead before you’re done, and once you are, maybe you’d like a harder difficulty? Or perhaps you’d just like to play some scenarios, or maybe some co-op or versus against a friend. Yes, as with every game, if you do the campaign you’re done. But this, like many other turn-based strategy games, got tons of reasons for another go. Also, to all achievement hunters out there, yes, they exist here as well!

My personal opinion is that this game is just great. I do love these kinds of games though, and if you do too, this might very well be worth your time. There’s nothing like having a rough time for six to ten hours straight, only to emerge victorious at the end. Of course, being as there’s so many possibilities and factions, there are many reasons to come back for another run down the road, leaving around the same amount of hours once more. A game I’ve already had the pleasure of playing for quite a few hours already, but I’ve just begun!