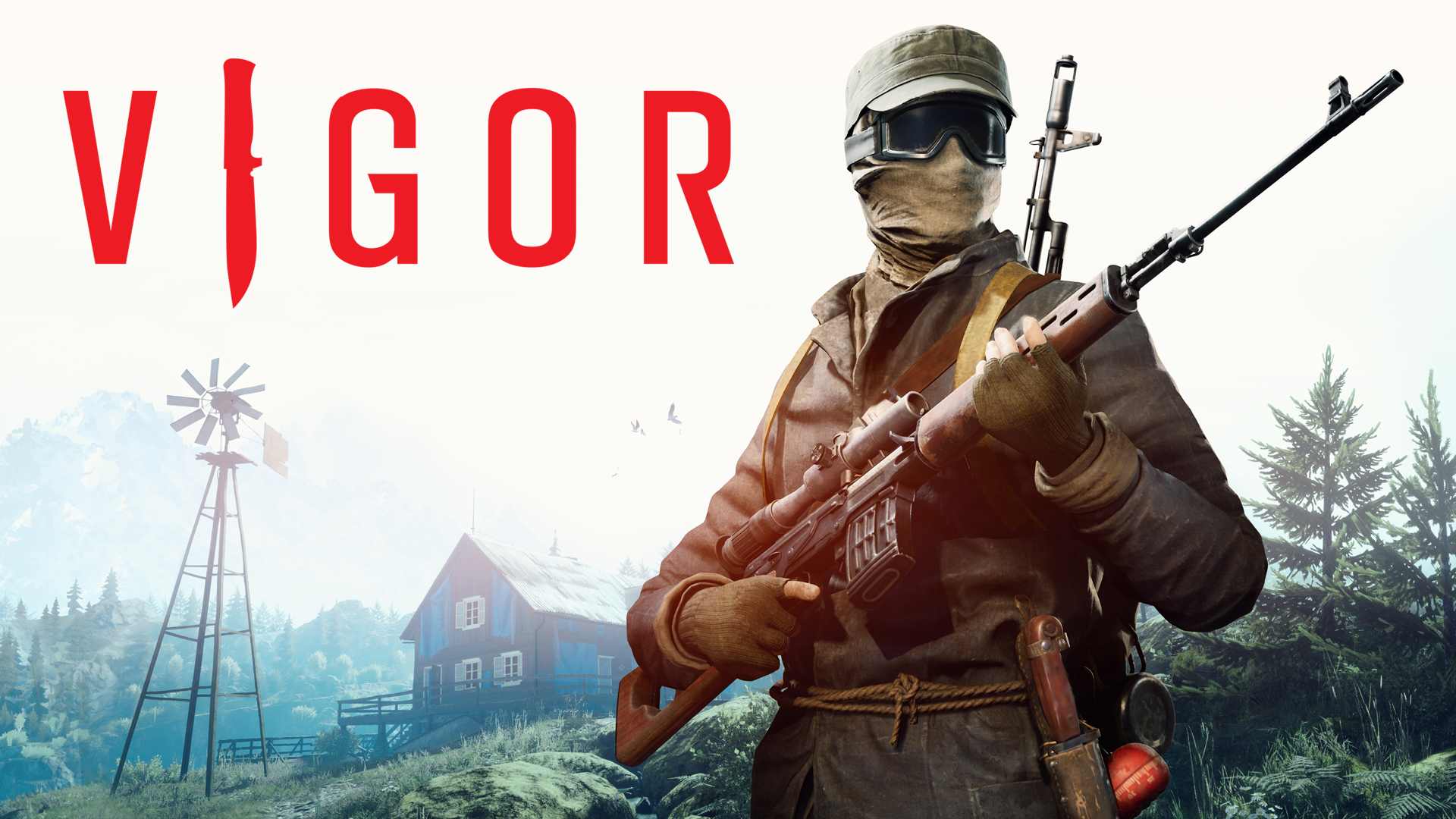 Ahhh the beautiful sunset behind a snowy mountain, radioactive air and other humans trying to kill me. Nothing beats the charming place of an apocalyptic Norway, trying to stay alive. Is the new game from the DayZ developer team any good?

Once upon a time back in August 2018, a small game named Vigor popped up in the Xbox One store as an early access game. A title where the setting is set in an apocalyptic Norway, and ‘Outlanders’ are trying to stay alive in this cold and radioactive environment. On the 19th of August 2019, the game got its full release!

Yes I know, this isn’t completely a story review of a title. But the story in this game is the setting, you create your own story through playing the games mode and building up your house. Therefore, I decided to not include a score within this topic.

The environmental graphics seen in Vigor is the most impressive thing about this title. The developers have truly accomplished to bring the astonishing Norwegian nature into a videogame, especially for a free-to-play title. Weapon models are decent, not a “wow factor” but decent enough, character models are very limited with decent modeling and textures. Overall, besides the environmental graphics, I would say that the developers have delivered a mediocre value when it comes to graphics, but then again, I don’t expect much from a free-to-play title.

There are still some bugs inside the game, such as swimming animation are non-existing, you’re just hopping around in the water like a ill rabbit. The sound design is uninspiring and confusing. Music and ambient sounds are almost non-existing to really uninspiring, the sounds that are there feel unfinished. And what do I mean about confusing? Well, let’s put it this way, when I hear a gunshot coming from the left somewhere, I get shot from my right, or maybe just the Norwegian thunder lord is pranking me, I don’t know.
5/10

Bad graphics can impact the gameplay, and in this scenario it does. Like I mentioned above, character animations in water are non-existing, so I recommend staying away from water while in combat. And the sound design needs a lot of work, so players can actually use the sounds like a benefit in combat, not gods pranking the outlanders.

But what can Vigor present as gameplay?
Your mission is to survive apocalyptic Norway and cold. You will get your own shelter which you must upgrade for your own survival. This shelter/house will function as your home base while you’re not playing against other players. Here you can craft weapons, outfits, upgrade your house, use the shooting range, gain resources (after purchasing a house upgrade) and other activities just for you.

To be able to upgrade your shelter/house etc, you will need resources. By playing online against other Outlanders (other players online) you might be able to get new weapons and resources.
A group of 8-12 players will enter one of the few maps available in this game on random locations. By opening your map you will find diverse locations such as factories, houses, location of the main airdrop and other points of interest. You get approximately 15 minutes to scavenge the area for resources before the radioactivity gets too high, you even might have managed to get that airdrop with rare resources as well. When you hear that the radioactivity kicks in, its time to escape, there are multiple locations on the map where you can escape, and you can escape anytime you want during the match. But there is a catch, you are not alone scavenging the area, and you’re not alone who wants that airdrop. If you get killed by another player, or manage to suicide, you will lose all of your resources and weapons you brought into the match. (You can buy insurance in the pre-lobby of the match, so you don’t lose your equipment)

This is the only available mode available in Vigor at this time, and for the first 3-4 hours it’s fun, but after that, it gets boringly repetitive. Because it’s here you will get the feeling that it is a free-to-play title with microtransactions. As mentioned you need resources to craft new weapons (you will lose a lot) and upgrade your house. The resources you’ll get in a single match are limited, and not only that, the upgrades take REAL-TIME to upgrade, for instance, in the beginning, it takes ten minutes to upgrade to the next level. And from there on, they use the “Facebook game/mobile game” tactic, so you will get your patience tested, and the temptation of using microtransactions keeps growing, and that is something we can’t stand.
4/10

The control schematic is the default 3rd person shooter game. They “haven’t fixed something that doesn’t need fixing”. The only issue I had is the delay/response time on the controller. I couldn’t lose the feeling that my character was a moving brick that didn’t move fluid on the map. This might have been an issue because the camera wasn’t fluid, but “bumpy”.
6/10

This is a tricky topic to talk about when it comes to free-to-play titles. In Vigor’s case, the replay value lays in playing online matches to gain resources to keep upgrading weapons and your shelter/house. But in the long run, as for the limited game modes and microtransaction business model, this will get boring and not awarding enough real fast.
5/10

Vigor got a lot of potential of being a great free-to-play title. But the lack of inspiring sound design and minor bugs that impacts the gameplay ruins the experience. The replay value is low because of the grinding of resources behind a microtransaction business model, and for me personally, I kept on playing because the setting was in Norway and the developers did a great job delivering the beauty of the Norwegian nature.