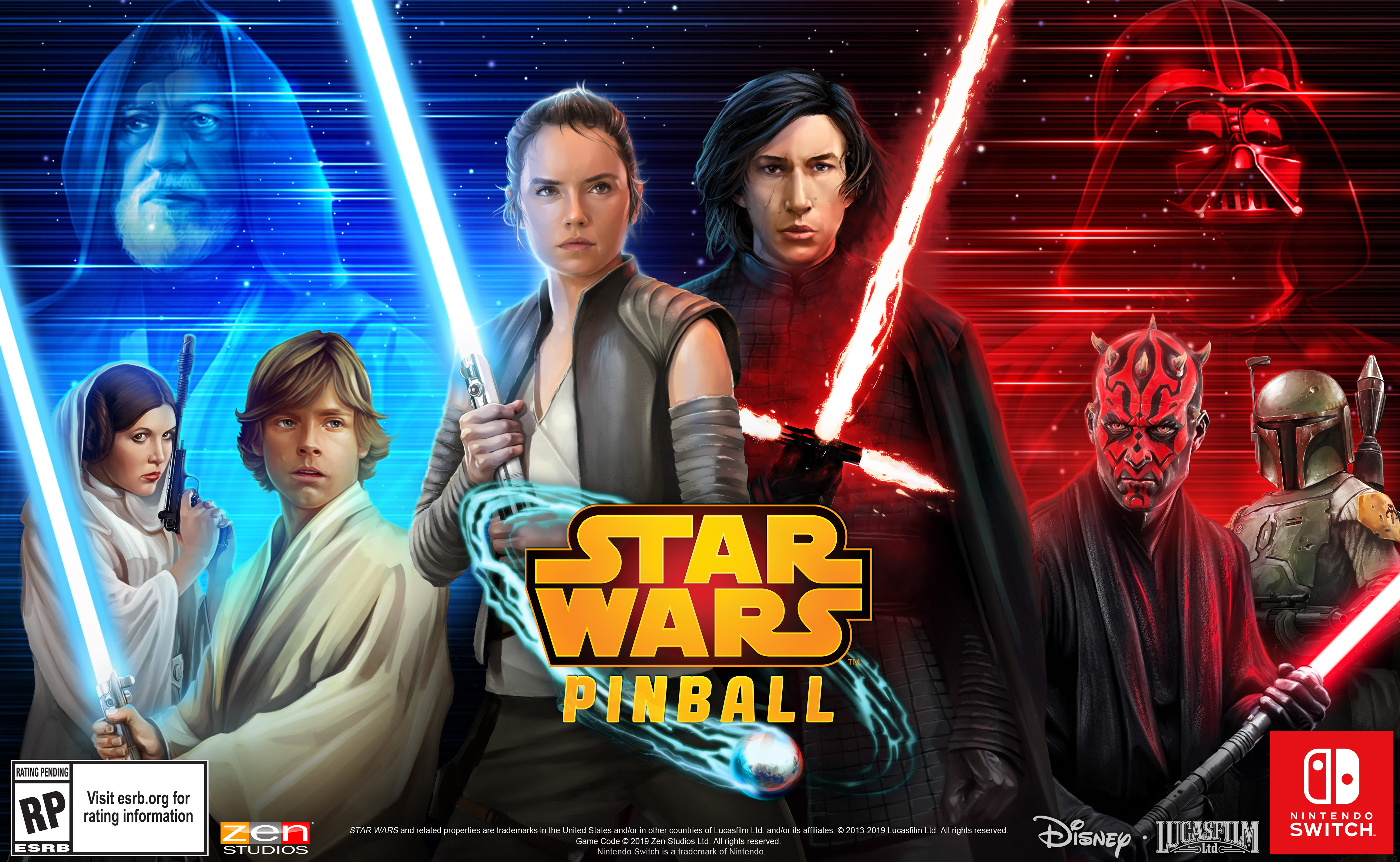 Never did it occurred to me that a Pinball game is a “must-have” title for the Nintendo Switch.

Fan of Star Wars? No? Seen the movies? No? Well… then this section of this review might not be your cup of tea. Because if I’m going to talk about the story in Star Wars Pinball, we’re going to sit here for a while, since the official storylines are vast over approximately 381 books!.
And this videogame is dedicated to the Star Wars Saga, so it is easy to say that this game is meant for the fans. But bare with me, because even though you’re not a fan, this is a great game for your Nintendo Switch.

But what I am going to inform you, is that Star Wars Pinball includes movie and TV series adaptions from A New Hope, The Empire Strikes Back, Return of the Jedi, The Force Awakens, The Last Jedi, Rogue One, Han Solo: A Star Wars Story, The Clone Wars, and Rebels. We will also visit locations such as Ahch-To Island and Mimban (Battle of Mimban) and familiar faces such as Han Solo, Darth Vader, Lando Calrissian in the Calrissian Chronicles table, Boba Fett, Droids will be present as well.

Inside the Career Mode, you will experience all of these familiar locations within the 50 different ranks you can gain. There are five different operations, each with its own set of missions and each mission has three tiers. Most of the tiers are about increasing your score, and by gaining score you must do missions. Missions such as limited flipper taps and unlimited balls but with a five-minute countdown. But more on this below “Gameplay”.

The only negative part when it comes to this section is that the original cast doesn’t have the voice-overs. If they had managed that, this would be perfect, not a big issue, but for extreme fans of the Saga, this might be a dealbreaker. I for one, do love this title even though it misses the original cast.
9/10

What can you expect from a Pinball title?
It’s just a box with a plastic/glass cover, and a metal ball rolling downwards and two thingies bumping the ball back up again. No, it’s more complicated than that. The textures are bright and colorful, a lot of the characters have their own animations, and there is a lot of diverse animations happening inside the tables. You simply can’t get this pinball experience in “real-life”. The music, the animations, the blinking colors from the table, it all provides a great visual experience that provided me nonetheless a lot of joy and happiness. To be picky, the menu’s and user interface could use an upgrade. As the visuals are almost perfect while playing, the menus look like a PlayStation 2 title from the early era.
9/10

Star Wars Pinball provides a lot of content for you to play, there are 19 different tables for you to experience, you have a Career mode, local multiplayer, League play, Galactic tournaments, and galactic struggle. And by local multiplayer, I mean setting highscores one by one on the same device taking turns in the mode called “Single Player”.

In Career mode as mentioned above, you play missions divided over multiple operations. There are in total 300 tiers to achieve, so get your A-game on!
But before you can head out to achieve those tiers, you must choose between the Dark Side or the Light Side. Because while you earn your scores, that score will be added to the “balance bar” called Balance of the Force. This bar is a struggle that goes on online, all players can contribute, which side will win? (You can switch between the Dark Side and Light side anytime you want)

While you battle your way inside the Career mode, you will earn ‘Holocron Cards’, those can be used to upgrade your Force Powers and Talents. These can provide you various bonuses in-game such as slowing down the time or more skill shot score bonus. And not to spoil everything, there are also few mini-games besides pinball, such as Space Invaders lookalike and laser sword fight against the Darth Vader.

A lot of the tables have their own themes such as Jedi versus Sith (Masters of the Force), X-wings vs. TIE fighters (Starfighter Assault), and being the bad guy (Might of the First Order).

And not least, there is the online multiplayer modes League Play and Galactic Tournaments. Those speak for themselves and do provide more variety and challenge to the more hardcore players.

Zen Studios have truly managed to deliver a great pinball experience, the ball physics are great, even added the tilting of the table (others have done this as well, but now it feels more “natural”)
10/10

The control schematic for this pinball game is very easy to learn. It’s simple but engaging, by default you use L and R or Zl and RL to use the flippers, and you push down the right stick to launch the ball. You can change the camera angle by pressing X, and once prompted you to choose scenarios/confirming selections with A. All of this is, of course, changeable in the setting menu. (If you dare, you can play the entire game with the touchscreen-only, it’s possible but difficult)
10/10

Highscores, highscores, and highscores. That’s mostly all of the replay value in this title, but there are highscores in diverse settings. You can improve your score by earning all three tiers in Career mode, you can get the best score as you can in online tournaments and league play, achieve all the upgrades of Force Powers and Talents. This pinball title will entertain me for a long time ahead, as it is a great “time stealer” and the perfect title for a console that can go in handheld mode. You also unlock famous soundtracks from the Saga by completing specific missions inside the career mode.
10/10

It’s safe to say that Star Wars Pinball is a must-have for pinball fans, Star Wars fans and even people with Nintendo Switches. It’s a great game, especially in handheld mode while your “on the go”. Music, setting, animations and so on provides lots of joy and the old school type of game named pinball lives once more for this generation of kids.