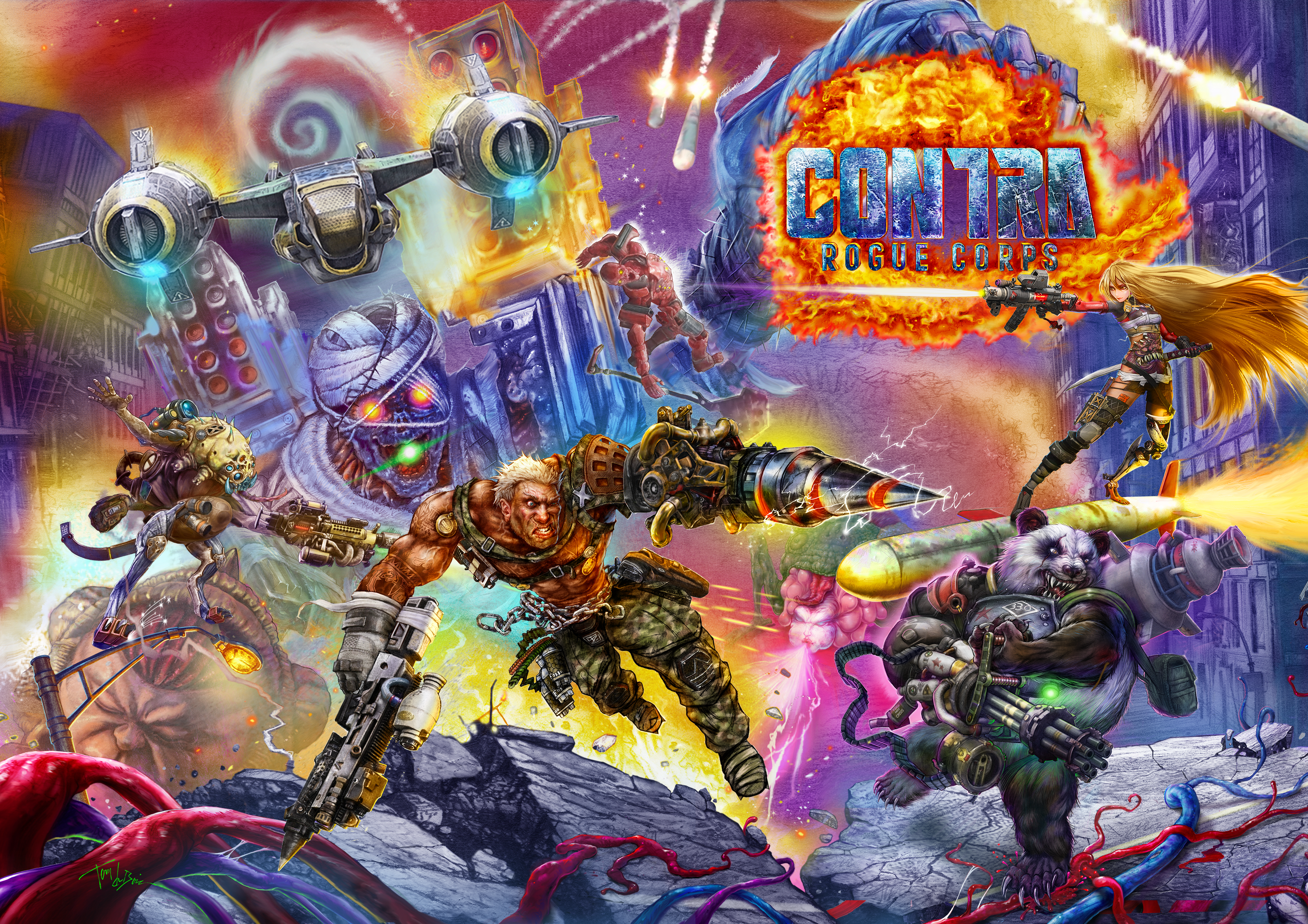 I’m actually unfamiliar with this series, so I can’t exactly compare this title with the old ones to see if it respects and keeps on the good old values. But I will, however, review this title as a newcomer. Is Contra: Rogue Corps a video game that can be enjoyed by newcomers and maybe veterans as well?

For those of you who are familiar with my reviews, I’m not a big fan of still images, odd-cartoonish artwork with voice-overs to present me the story of the game.
Contra: Rogue Corps story takes place right after the events of Contra III: The Alien Wars.

If you look at the video linked in Contra III, or just Google it up, you’ll see that the team behind Rogue Corps has a lot of potential to create a great game with today’s standards, as the old ones is a 2D platformer with limited storytelling and more. The question is, did they manage it?

Unfortunately, the story is easily forgettable almost in the very first half an hour in the game. Think of it as an 80’s braindead action movie, there is no context, but a lot of meaningless alien slaughter. As I understand, this series has never taken itself seriously after a bit of research online as well as during the presentation at Gamescom. But I can’t lose the feeling that every cheesy line (and I do love cheesy lines) is forced, and it didn’t exactly help with decent to mediocre voice-acting either.
2/10

There is one thing that the developers should receive a “great effort” trophy. And that is the effort to bring the Contra series from a 2D platformer with very few polygons/bits to a fully 3D modeled characters. Contra: Rogue Corps might not be the best-looking title compared with other twin-stick, action games nowadays, but it’s a great effort. Even though I’m not a fan of still images, the artwork is filled with characters and scenes that try to deliver an adrenaline-packed action sequence, but it fails to deliver me this.

Even though the effort was great, I have to compare it to other titles in the same genre, twin-stick action game. There isn’t a lot of diverse character models, and the few ones we got on both the “hero side” and enemies, isn’t exactly interesting, except for the Panda. Take the character Kaiser for instance, yes I know that they went from 2D to 3D, but just look at his face and see if you still have your soul intact afterward, the stare is intense.
4/10

I’ve talked a lot about the negative parts of this game so far, but one of the bright sides is the progression system. Each character has its own skillset and weapons that can be upgraded in base-camp. So let’s introduce the four different characters that we can play as:

Short introduction of the characters
Gentleman – Brain Bug alien raised by humans. Thinks the rest of the team are ill-mannered and vulgar, especially the Panda. Argues over table manners and the neatest and most efficient way to dispatch an enemy.

Ms. Harakiri –Famed assassin specializing in stealth and infiltration. After barely escaping death during the Alien Wars she fused together with an alien, now taking residence in her midsection.

Kaiser – A soldier from the Alien Wars, rebuilt after receiving massive injuries. Now features a massive arm that transforms into a drill.

Hungry Beast – Once the noted scientist, Kurt Steiner had his brain inserted into a giant cyborg panda. Now he spends most of his time looking for delicious snacks.

Playing solo gets boring really fast, the campaign felt a lot longer to play through than the 15-20 hours I’ve spent. The missions are extremely repetitive, go from point A to point B within a limited amount of time, destroy enemy spawn points, defeat bosses, every single mission after the first hour feels copy-pasted. And the level designs are really dull to explore and doesn’t exactly provide a challenge for the players.

Playing with friends offline isn’t the biggest treat in Contra: Rogue Corps, the only downside to this feature is that you can’t play the same storyline you play in solo mode. That wouldn’t have been a problem, but the missions are equally repetitive and uninspiring as the solo mode with even less interesting story or context.
4/10

As a twin-stick shooter/action game, the most important buttons are the sticks. In this scenario, I played the game on the PlayStation 4 with a Dualshock 4 controller. This means I used the “L” to move and “R” to aim, R2 to shoot, R1 special attack, triangle to release a bomb and square to change between weapons. Theoretically, this schematic is standard and should work perfectly with a twin-stick game. But the response time, especially with the aiming (“R”) feels unresponsive which gave me a lot of awkward aiming. There were a few scenarios where the other buttons also responded late, which made me spam the buttons to make my character react, and then just lose stamina, bombs and died. (And I died a lot because of this…)

If the controls had been more stable and responsive, the game might have been more enjoyable.
5/10

Each mission gives you a score, so it’s easy to say that some of the replay value is beating each mission with a higher difficulty, better aiming, no life’s lost etc to get an even better score. There is a multiplayer mode where up to eight players can play against each other, earn ranks and enough money to buy diverse equipment in the Barbarian Shop. The only downside of the multiplayer, both co-op and PvP, is that the waiting time is loooooong. It took me almost an hour to get inside a room to play PvP.

Putting the online elements aside, the story is forgettable, the gameplay is repetitive and uninteresting, which gives me a lot of reasons not to play this game again.

Contra: Rogue Corps has some potential to be a great twin-stick action game but compared to other titles in this genre nowadays, it’s below mediocre. The plus side is the feature to play this game on split-screen with friends, but the long waiting time to play with others online is long. I didn’t enjoy playing this game solo, and it was a short amount of time I enjoyed playing this game with friends, as it’s very repetitive and uninspiring. And after some research, I wouldn’t say that this is a Contra game, if the Contra named was removed it might have been a decent twin-stick game.