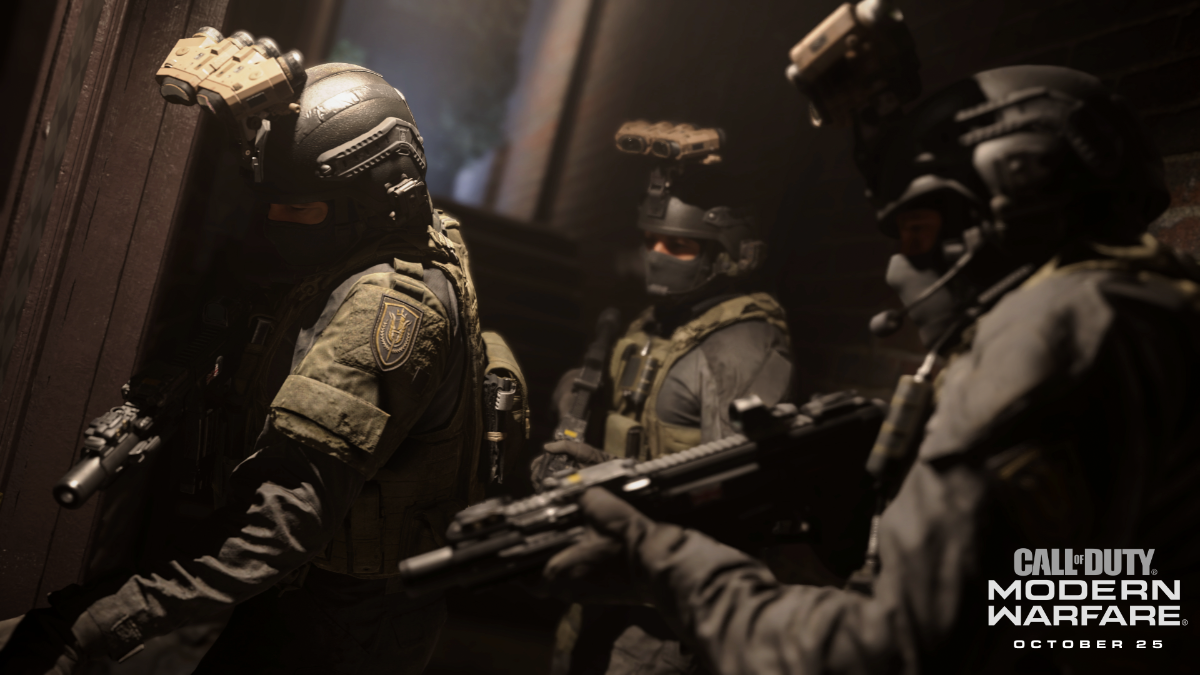 Again I’m a bit late with this year’s Call of Duty review as previous years. But this time I did it on purpose, why?
Well, let’s put it this way, I’m a huge Call of Duty fan, so this time I wanted to give Modern Warfare a little time to sink in, digest it, really get all of the emotions out of it. And of course, use a lot of time discovering the story mode, Co-Op, and the ups and downs in the multiplayer after a few updates here and there. So finally, here is my review of this year’s Call of Duty.

I was excited to see what Infinity Ward meant by rebooting the Modern Warfare series, especially now that last year’s Call of Duty didn’t have a story mode at all. I’m a huge fan and love the story in the previous Modern Warfare games. Following Captain Price, Soap Mctavish, Gaz and other characters throughout the years. And for those of you who are old enough, the story missions such as “No Russian” and “All Ghillied Up” are remarkable missions that won’t be forgotten for a long time. Not to mention other scenarios, backstabbing, deaths and so on just to try to mention some without spoiling the story too much for our young readers.

But that isn’t what we are going to talk about, now I’m going to provide my opinion on Infinity Ward’s take on the new Modern Warfare story. Even though it only took me approximately four to six hours to complete the story (depending on your difficulty), it still keeps on bringing an entertaining story. Unlike previous titles, this year’s Call of Duty game comes with more in-depth darker storytelling, and this year it’s dark as hell. And not in the way as “We’re going dark” with night vision goggles, but in a way that touches your emotions in a dark matter.

If you haven’t been spoiled or seen the story yet, I won’t talk much about the narrative here besides what’s been officially released on their website.

“Partner with special forces and freedom fighters to retrieve stolen chemical weapons. Covert operations will take you across Europe and the Middle East in order to stop full scale global war. The world will look to you to do what needs to be done.”

The narrative kept me on the edge of my chair and I almost made a tear, the story is short but brutal and dark. The only negative thing I want to say it’s that I wanted even more in-depth story, at some points, I felt like the story was being pushed forward. But the overall experience is a dramatic single-player campaign.
9/10

In our interview with March as well as many other presentations and interviews, they fronted a lot that especially the story mode would have a photorealistic graphic. In my opinion, they nailed that part, there are some minor, minor flaws in the facial animation, but to this day I haven’t seen a videogame been able to do what the team behind Modern Warfare has created. (Sorry Naughty Dog) The characters look insanely good and casting Barry Sloan for Cpt. Price is a perfect match. At launch, there were some hiccups in the sound design when it came to hearing your enemy footsteps while playing online. But after a few patches, a lot of those hiccups are being fixed.

Besides the amazing cinematic story, I prepared myself for a drastic downgrade on the 3D designs, textures and environmental graphics when I entered the multiplayer. Let’s just say that it didn’t disappoint me, and actually surprised me a bit.
10/10

Multiplayer
The multiplayer ever since Call of Duty 4: Modern Warfare is the most important mode for every Call of Duty player. This year’s Call of Duty finally feels a bit different from the previous titles in the last years. Gunplay feels amazing, you can really feel the recoil of your weapon, controlling the recoil is the key. The pace is a bit slower than usual, also making the gameplay a bit more strategic than usual. With a different gunplay mechanic and slower pace, the overall experience finally feels new and fresh, but yet familiar.

Besides the usual modes such as Team Deathmatch, Search and Destroy and so on, we got some new, surprisingly fun modes, Cyber Attack, Gunfight, and NVG.

Cyber Attack is a different take on Search and Destroy, there is only one bomb both teams must collect and teammates can revive you if you die, NVG is the familiar Team Deathmatch mode with a small twist, everything is dark and everyone must use the night vision goggles to be able to see. A lot of your weapons sights are limited as well, replaced by a green laser.

The Gunfight mode, however, feels absolutely strategic fresh. Two players play against two others on small maps to defeat one another or capturing the overtime flag (and the flag appears fast, so no, no camping), the default is first to win six rounds, but after two rounds your loadout changes to random weapons and equipment and everyone uses the same loadout. And by the way, you’ll have health points, so no health regeneration here.

For now, there are a limited amount of maps available, some of them are more inspiring than others, but each one of them works, except the 6v6 matches on the large scale maps.

The in-game gunsmith also provides a great amount of time investment, as I found myself using hours to grind for attachments and find the hidden weapons that are inside the gunsmith.
9/10

Co-Op
The co-op mode or special ops as it’s called it’s not similar to previous Modern Warfare Special Ops. Before you and a friend could team up online or locally to accomplish missions in a specific linear way, such as the snow scooter missions, the stealth sniper snow mission, using the AC130, I have a lot of great memories playing these missions.

But now they have completely changed the gameplay mechanic to a more “free roam” like type of mission. Special Ops has a very limited amount of missions where up to four players compete against the AI. The task at hand is easy on paper, connect or destroy data centers just to give an example, and the process of doing this is, is up to the players. I do like the idea behind it, but the execution is brutal. The AI is unfairly difficult to defeat, even though we were a full 4-man squad communicating with each other. Multiple times we found ourself fighting for not running out of ammunition, we constantly died, why? The enemies spawn everywhere all of the time, in big numbers as well. You will not catch a break and will get pinned down a lot, you will even have to defeat three juggernauts and five tanks at once in one of the missions, HOW?! Are we supposed to manage that without cheating the system?

Even if we managed to accomplish the mission, we got very little experience points, we got no more cutscenes in the story, actually, I couldn’t exactly tell if we got more story or not… (The intro cutscene is the only one we get!)

With that putting aside, the survival mode (PlayStation 4 only for now, sorry) is a fun treat, as we expect the enemies to attack us in hordes. But that is not enough to save this mode.
5/10

Other than that I might have to buy more Dualshock controllers out of the typical “Call of Duty frustration”, didn’t I encounter a single issue in responsive time nor huge changes in layout. Console players have a few options to tweak their settings, but PC players might fall into a pit of various setting opportunities.
10/10

To this day I’ve spent too many hours playing than I should, and I will probably be spending a lot more in the future. The replay value is topnotch from launch and post-launch content. The multiplayer provides a progression system with hints of battle pass challenges to complete to achieve minor rewards, missions to complete online, co-op mode, gunsmith exploration, and lots of lots of hours in Gunfight.
10/10

Even though I’ve tried to tone it down a bit by waiting to write this review, I still find myself truly enjoying this year’s Call of Duty game, there is a lot of high-quality content, and if you are a Call of Duty veteran waiting for the big change, well, it’s here!
The good old Call of Duty feeling is back, but in a new, fresh but familiar look.