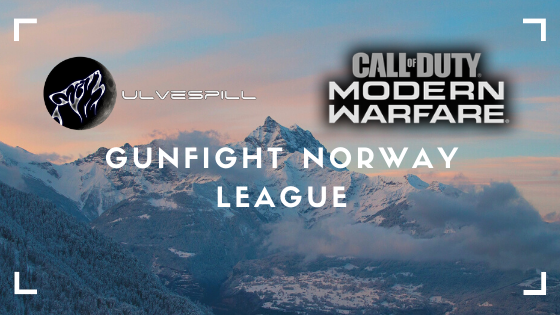 After several years without any Call of Duty league play in Norway, we decided to host one ourselves: We proudly present Gunfight Norway League!
Just shy of New Year’s Eve, we will run our very first league play of 2v2 and 3v3. Our 2v2 league play will be in Modern Warfare’s newest entry: Gunfight. Whilst our 3v3 league play will be played in the annual Search and Destroy mode.

If you and your friends want to join, just do it. If you are a part of an Esport organization or Gaming Community, you are free to join! But what if we are 20 people who want to join from our organization? You can all join! Just remember to read the rules about substitutes, as there can be an unlimited amount of teams (for instance Ulvespill Esport 2, Ulvespill Esport 3 and so on) as long as there are different players on each team.

On both 2v2 and 3v3, there will be played one match each week against another team in each division. And after everyone within the same division has played against each other, a final “endgame” will be hosted to crown our very first GFN Champions and to receive some goodies from us as well as the GFN trophy!

The ruleset can be found here.
To enter our 2v2 Gunfight league play, click here.

The 3v3 Search and Destroy league play will be announced soon.
The ruleset can be found here