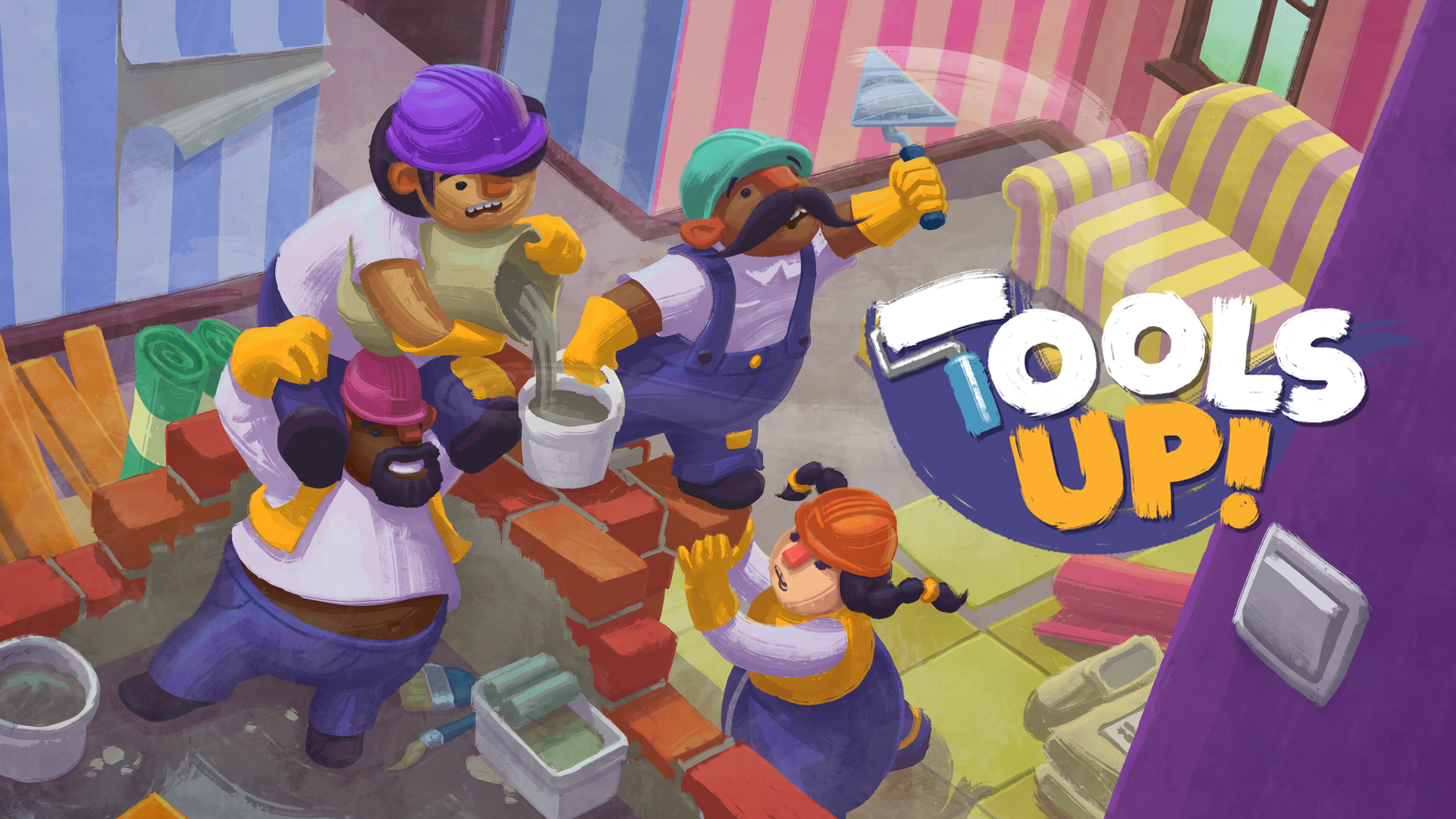 I love Overcooked and Overcooked 2 and since then I’ve discovered there are lots of various titles using the same mechanics, and Tools Up is one of the games that is trying to live up to the success of Overcooked, just in a whole new scenario, house renovation!

Name: Tools Up!
Developer: The Knights of Unity
Publisher: All in! Games
Released: 03.12.2019
Platforms: PC, PlayStation 4, Xbox One, Nintendo Switch
Reviewed on: PlayStation 4
Acquired: A copy of this game was provided by a publisher for review purpose

Overcooked came with a thin, but oddly entertaining story-mode. Tools Up!, however, doesn’t come with a story mode at all, and therefore the story score is excluded.

Tools Up! provides its own charm of chubby cartoonish characters, who attempts to renovate various apartments in a clumsy way. As simple the overall character design is and little variation of textures, it still holds a great appearance. The colors are bright and really “in your face”, for example: You’re painting the wall pink, and then it’s pink. Sound design and music are “cute” and feels like it suits the thematic the developers are aiming for.
7/10

Let’s face it, who doesn’t love house renovation games? You don’t? Why, what’s wrong with you…
If that’s the case, you might fall in love with Tools Up!. Like Overcooked time is an issue, and co-operation is the key. The gameplay mechanics isn’t the biggest nor revolutionary, it’s simple, yet fun to play, especially with friends locally. Tools Up! provides a small game with various levels, where each level is an apartment that is in a need of renovation. As you progress the harder it gets, it’s not that many levels though and it isn’t a lot of various things to do, so it might get a bit repetitive.

But the mechanics work, first off you’ll have to locate the blueprint to figure out what you’re going to renovate. You can play this in solo mode, but it is highly recommended that you play with friends, as you will encounter multiple tasks that have to be done and the time to do it shrinks. You’ll get tasks such as painting the walls, adding carpets, mix cement to fix walls and floor, and cleaning up messes. Be careful though, because if you go way to near the paint bucket you will spill and have to clean up even more.

Every room that needs renovation isn’t always a big one, and that alone brings a challenge if you play with three or four friends. We encountered multiple situations where we needed to move furniture, paint bucket, etc but instead bumped into each other or picked each other up instead, wasting a lot of time. (Even though it was fun to pick up my friends and to see the anger builds up.)
7/10

You simply can’t get a simpler schematic, easy to pick up. On that note, it’s easy to pick up things that you’re not meant to pick up, for instance, your friends. One annoying thing was the camera movement, sometimes it worked, other times it didn’t, it was a hit and miss.
9/10

As mentioned there isn’t a lot of levels in Tools Up!, each level has a three-star ranking system and once you achieved three stars on each level, you’re pretty much done with what the game offers. You can, of course, pick up the game later on and play a single level just for fun with friends as a party game locally, but other than that the replay value isn’t that big.
6/10

Tools Up! is a fun party game that brings the mechanics from Overcooked into the renovation world. As the game is okay to play alone, its highly recommended that you play with your friends locally.